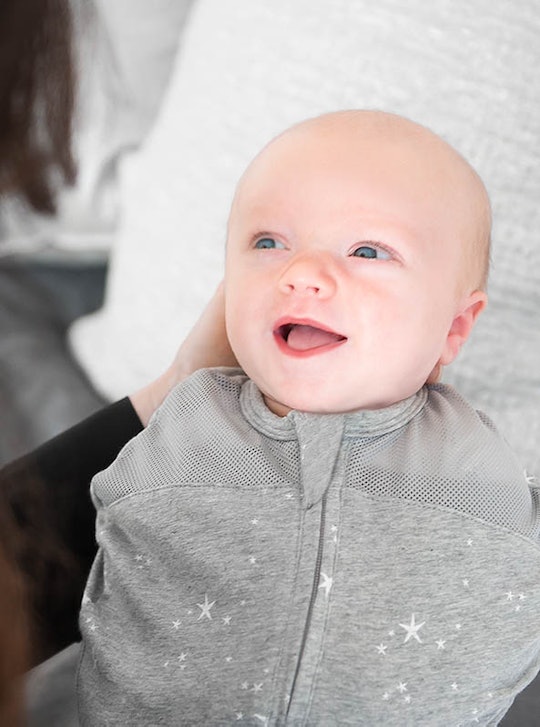 Swaddling is one of the first things that parents find utterly mystifying when they bring home their new baby. It seems simple in the hospital, with the nurses' guidance, but as soon as you get your baby home, they turn into a tiny magician, easily wriggling out of your blanket origami. Thankfully for confused parents everywhere, Dr. Harvey Karp, the author of The Happiest Baby on the Block and the inventor of the award-winning SNOO bassinet has just released a new sleep product that's designed to demystify your baby's swaddle. Sleepea, the easy-to-use, five-second swaddle might just allow your whole family a little more sleep.

The Sleepea boasts a lot of attributes that are likely to make it popular with parents and pediatricians alike: room for baby's hips to move and grow, no loose blankets that could put your baby at a higher risk for SIDS, and made of breathable mesh that will keep your baby from overheating. As parents who swaddle their baby know, there are a few design flaws with many ready-to-use swaddles, and rolling your baby up in an adorable baby blanket is easier said than done. Well, the Sleepea aims to address every issue that parents have when it comes to swaddling their newborns with special features including a "quiet" velcro insert to keep the baby snug, and a zipper that opens both ways, making nighttime diaper changes — cross your fingers — seamless.

The Sleepea swaddle actually follows on from the success of Karp's award-winning SNOO sleeper, which was introduced in late 2016. If you're not familiar with it, the SNOO is a souped-up crib that uses white noise and motion to sooth your baby (it can sense when the baby is crying) and includes a swaddle built-in swaddle that keeps the baby sleeping on her back. The swaddle insert that was made to be used in the SNOO was so effective — you literally just velcro their arms down and zip them up — that parents started asking for a version that could be used outside of the crib. Thus the Sleepea was born.

You can get an idea of how the swaddle works in the video below, starting from the 33 second mark:

The other special feature the Sleepea includes is that is uses elastic bands to keep baby's hands from sneaking out the top or unraveling the swaddle. The Sleepea comes in three sizes, small, medium, and large, and accommodates babies from 5 to 25 pounds. For those babies that have better control of their hands and is less likely to startle themselves awake from moving around (when they get a little older), the medium and large sizes both have holes that allow baby's arms to be free.

If you've spent any time researching baby sleep tips on the internet or reading sleep books, you'll know Dr. Harvey Karp as the leader of the five S's of soothing your baby: swaddle, side or stomach position, shushing, swinging, and sucking. It's no surprise that the doctor who reinvigorated the swaddle movement by authoring The Happiest Baby on the Block books would reinvent the swaddle.

And if you've read up on the 5 S's, you'll know the reported benefits of swaddling your baby: it makes babies less anxious which can help them sleeping longer, and it encourages parents to put their babies down to sleep on their backs, which greatly diminishes the risk of sudden infant death syndrome (SIDS). according to Baby Sleep Site.

The Sleepea is available at Dr. Karp's website, happiestbaby.com, as well as on Amazon, and retails for $24. You can get it in a star-print pattern in grey, teal, pink, or blue.

If you have a baby on the way, you might want to add the Sleepea to your registry or shopping list, because it won't be the first time Dr. Karp saved us parents from losing yet another night's sleep.

More Like This
Valentine’s Day Photoshoot Ideas For Your Little Cupid
Celebrate Your Baby’s 1st Valentine’s Day With These Instagram Captions
The Best Travel Tips For Solo Parenting
Does The FDA's Plan To Limit Lead In Baby Food Go Far Enough?
What Parents Are Talking About — Delivered Straight To Your Inbox