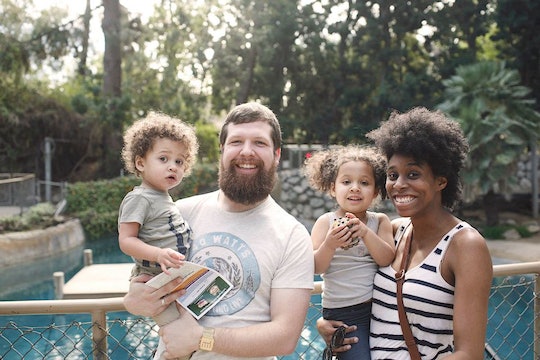 Getting Divorced Wasn't The Best Thing To Happen To Me, But It Was The Right Thing

Last year, at 27, I left my husband of seven years. The father of our two children. We’d been together since I was 19. I thought we’d grow old together. I believed in love, particularly the love we had for each other, and I believed in us. I didn’t understand that while love is beautiful, it isn’t always enough to sustain a marriage; it isn’t enough to glue you together when something devastating happens. And for us, the devastation came in layers; it was never just one thing.

When we met, I knew I loved him instantly. I thought he was the most brilliant human ever, and I’d never known anyone like him. He enchanted me, and I wanted badly to be near him, to know him. Our first date was easy and natural, and we spent everyday together afterward. We’d talk about our future, make plans for the home we’d build together, the goals we’d achieve, the family we’d create. Everything was perfect.

A year before we met, I was raped for the first time. After that, boys I knew in college sexually assaulted me over and over. When I met Leif, I told him, thinking he wouldn’t want to stay with someone as “damaged” as badly as I was. Instead, he told me: “You matter, and have value.” It would be the first, and the last, time we talked about it. It came up infrequently, and I was still so ashamed.

In the bedroom, certain sexual positions and acts would trigger me to recoil in fear, and I had nightmares about being attacked and raped. I didn’t tell Leif. Eventually, the nightmares faded, and having sex with him no longer haunted me. I thought I had somehow overcome the trauma I’d experienced, that it no longer plagued me. Four years later, it came roaring back.

In bed one day, I told Leif, “if you were to sleep with someone else, I wouldn’t care. I don’t know why, but I wouldn’t,” and I meant it. I didn’t care if he slept with someone else because I suddenly had the urge to do the same. The next weekend I started having an affair, and I told myself it was because I was trying to fill a void; a hole in me and in our relationship. Our affair lasted for months, and all the while, Leif waited for me patiently. I didn’t want to be in this other relationship, despite the fact that I cared about him, but cheating, as I’d later learn, was my way of responding to my rape; my way of feeling in control of what had happened to me. I fell into a vicious cycle: I hated myself and I watched Leif suffer, but still, I couldn’t stop.

We spent four years attempting to salvage our marriage. We tried fighting in the best ways we knew how. We did couples’ therapy, I went to therapy alone, we took trips together, and we tried an open/polyamorous relationship. Leif was more than willing to keep trying, but I’d realized I didn’t want this, or him, anymore. Not because he wasn’t good; no, he was all that was good. But along the way, I had changed -- and so had he. He broke in ways I didn’t know were possible, yet he clung to us, and to me. My pain had caused us both to change. He loved me, but it now came with conditions, and where there was once there was trust, there was nothing. I grew braver and more confident in myself, I gave myself permission to just … be.

So when he asked me to give it one more try, I couldn’t. I couldn’t look up at his face, knowing that it was fearful, angry, and sad. I couldn’t share a bed with him anymore, knowing all the ways I’d hurt him, how I had “slept around too much.” I couldn’t get into another argument, one in which he’d automatically “win” because he could bring up my past, and I couldn’t risk breaking his heart anymore than I already had.

We agreed to divorce. He didn’t really want to, but he respected my choice. For months we kept this decision between the two of us, living in the same house, sharing the same bed, our routine never changing. We had two children together, and we wanted to make sure that we had talked through every detail before breaking the news to them. At first we thought we had it all figured out, but we realized we weren’t prepared. Keeping a schedule has been difficult, dropping the kids off to each other has been difficult, trying to continue life while grieving our marriage has been difficult. Yet, amidst the rough parts, our family has stayed in tact, and in a way we are happier with each other; happier for each other.

Recently, we went to a show together. It’s normal for us, even though we’ve been apart for awhile. A song came on, one that we’d play for each other when we first fell in love, and the minute it started, we held each other. I don’t think I’ve ever cried harder than I did at that moment. The music had never felt more beautiful, or more tragic. It marked the end; our chapter had closed. I felt it, he felt it, and for a moment I wondered how we got here, whether we could still fix what had broken. Deep down, I knew I it was time, to just let go and move on.

More Like This
Stepmom Quotes & Sayings For Every Occasion
43 Instagram Captions For National Brother’s Day That Say It All
Say What's In Your Heart With These Stepmother's Day Quotes
11 Signs You're Sexually Attracted To Someone, But Not In Love With Them