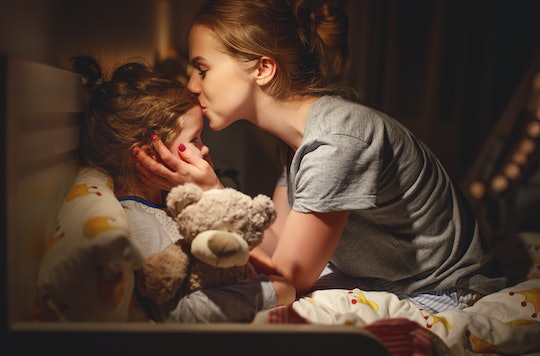 Anyone who has raised kids can attest to how difficult bedtime can be. Kids have a knack for somehow still finding an abundance of energy, even after only a tiny bit of sleep. Most parents, though, have noticed that a good night's sleep for their kids equals the same for them. A recent study has backed parents' knowledge, proving that getting kids to bed earlier might make moms healthier.

Getting that right amount of sleep is really important. As outlined by WebMD, kids who don't get enough sleep have trouble regulating their emotions, bad judgement, appetite changes, and may perform worse in school. But, what about the parents?

The need for sleep doesn't disappear when you become a new mom. Almost every parent has pulled more than a couple of all-nighters for one reason or another, but that isn't healthy in the long-run. Now, researchers are diving into the benefits that kids' sleep has for both children and their parents.

Starting in 2004, a study by Growing Up in Australia began tracking thousands of families. According to the study's website, they followed the development of 10,000 young people and their families, in partnership with the Department of Social Services, the Australian Institute of Family Studies, and the Australia Bureau of Statistics.

Every two years, data was collected from participating families through a series of interviews that allowed researchers to check in on their health, both mental and physical, according to CBS Philly. The first group observed 5,000 children between ages 0 and 1 in 2003 and 2004 and the second cohort of 5,000 children was aged 4 to 5 years in 2003 and 2004, as outlined by the study's website.

After looking at sleep and lifestyle data, researchers found children with earlier bedtimes had a "healthier quality of life," as reported by CBS Philly. In addition, CBS Philly noted that researchers found improvements in family live if children were put to bed earlier, including gains in moms' physical and mental health.

It makes perfect sense. If kids are asleep in their beds, moms are able to start winding down for the night, and can take care of themselves.

Moms unapologetically prioritizing their sleep is important, as noted by Motherly. In 2017, researchers found that women who have kids are more likely to be sleep deprived, although having kids doesn't really impact men's sleeping patterns. As outlined by Motherly, researchers from Georgia Southern University found that only 48 percent of mothers under 45 years of age reported that they got at least seven hours of sleep each night.

For adults, that lack of sleep does have consequences. As reported by the National Institute of Child Health and Development, sleep deprivation can impact a person's ability to think clearly, react quickly, and form memories. The NIH also noted that sleep deprivation can lead to irritability, depression, and increased anxiety.

And although bedtime can be a struggle, there are more and more resources for parents to find new tricks and tips, thanks to the internet.

One big tip for improving kids' bedtime: make a routine and stick to it. Kids thrive on structure, as noted by the Alaska Sleep Clinic. By providing them with a solid routine each night, they can take some security in knowing what to expect. It also helps them make associations with activities that they do nightly before bed and the idea that bedtime is coming.

It's also recommended that parents shut off screens at least two hours before bedtime. In the past, research has shown that the light from television, phone, or computer screens can interfere with the production of melatonin, an important part of the sleep cycle. And some of those old wives tales do work, like giving kids warm baths before bed, or playing white noise.

Overall, the most important thing a parent can do is remain consistent. Kids really do love routines. They may sometimes try to fight or push back, but keeping that routine means you help push the brain into sleep mode.