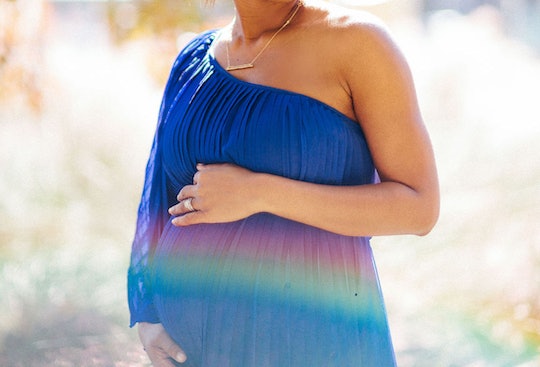 I Got Past My Own Birth Trauma: Here's How

I expected my first birth to be painful. But I never imagined that my labor experience would leave me with years of anxiety around most birth-related topics. Going into my second birth, I had to deal with past birth trauma.

I thought I would have more control over my first birth, since I went into labor on my own at 38 weeks and four days and narrowly avoided an induction. But I was wrong. The medical team decided that it was best that we followed the limited movement protocol they planned for. And since I couldn't use the pain management technique I had banked on using, my entire birth plan crumbled.

From there, I ended up with an epidural, forceps-assisted labor, and an episiotomy. Things had taken a drastic turn from what I expected of my birth experience. I felt like I had failed, and missed my birth goals by a wide margin. But I didn't have time to linger on the mental effects for long, because I ended up requiring an emergency surgery to remove my retained placenta.

That experience that sat with me for a long time and caused me to feel like I would never go through birth again. As the months passed the physical wounds began to heal, but the mental impressions remained.

I made sure that the doctors were aware of my experience. I informed them that I work best with the ability to ask questions and get answers in a timely fashion.

One of the most therapeutic things I could do was tell my story. The more I shared my experience through my writing, the more I realized that I was not alone. I began to talk to other women about their birth experiences. I became aware of the research that indicated how overlooked and mistreated women often are by the medical industry. I felt solidarity and frustration at the ways our stories mirrored each other. But even more so, I learned that my experience was heavily impacted by my identity as a Black woman. While women are mistreated class in general, Black women in particular, face a unique cocktail of struggles.

That awareness bore my passion to speak out on maternal issues, especially at the intersection of race. But I benefited from the trauma also. Through writing, I started to feel like I had made enough progress healing past the trauma associated with my birth experience that we were ready to try again.

Two years after my initial birth experience, we found out we were expecting our second child.

I felt different this time. With each doctor's appointment I brought an accompanying sense of determination and Fire. I was not going to be mistreated by the medical system again. But even more, I was determined to have others advocate for me.

At my initial doctor’s appointment, I made sure that the doctors were aware of my experience. I informed them that I work best with the ability to ask questions and get answers in a timely fashion. I let them know that I needed full awareness of what decisions they made and why they made those decisions relating to me and my baby. Thankfully, this time I was working with the medical staff who did their best to accommodate my needs in a caring and considerate way.

At the end of my pregnancy, a few unexpected complications arose but prenatal care staff kept me in the loop about what was happening and what we needed to do to keep both of us safe.

I went in for my induction early Monday following the Thursday I'd been informed of complications.

I'd spent the weekend bouncing on my labor ball and losing my mucous plug. So when the induction began, I was already three centimeters dilated.

The contractions started quickly and progressed just as fast, but I was determined to wait as long as I could before taking a pain killer.

Back labor, forgetting to eat that morning, and the quickly increasing pain made laying in the bed attached to the monitor nearly unbearable. The longer I laid there, there more I wanted to give up — thankfully my friend who served as my doula convinced them to let me walk around the hospital.

Before I knew it, I was holding my daughter.

At first, walking was enough. But when my water broke (it was dramatic like in the movies y'all!) the pain went from manageable to making me want to die.

The worst part was having to get in bed again. Nearly everything form there forward was a blur. I was hurting and I was rethinking having sex — ever!

But somehow, I made it through. And things progressed so fast I didn't even have the chance to get the pain meds. Before I knew it, I was holding my daughter.

Although I required an induction, I feel a lot better and my birth experience was as close to perfect as I could have imagined.

The drama of my first birth terrified me and left me wondering if I should ever have children again. But it was also an opportunity for me to learn about myself and become more aware of some of the issues that plague women and the Black community.

I'm not allowing trauma to hold me back anymore.