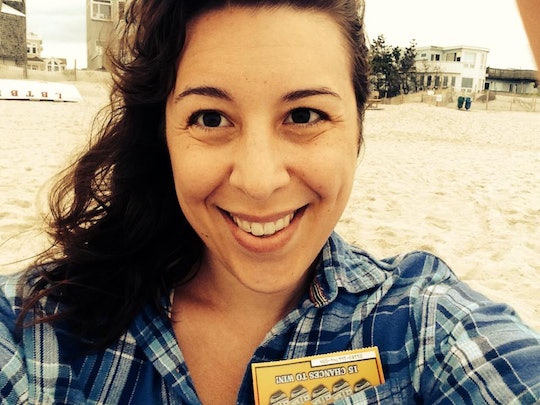 Getting Pregnant Might Mean Losing The Plus-Size Body I Love

For the last two years, I haven’t been my body’s biggest champion. I’ve gained 50 pounds. The stress of helping a parent get sober, a house purchase, and a new job got the best of me. But now, at 36, with talks between my husband and I about having a baby, I’m feeling the push of fitness’ hand to get in shape, contemplating the idea that getting pregnant might require losing weight.

“I want you around another five years,” my husband said over his takeout.

“I want you around, too,” I said, flattening my white rice on my orange chicken.

Like me, Joe is large. His tall, stocky frame never bothered me. And likewise, my body was never a concern, until now, at the crossroads of pregnancy and diabetes.

But I’m not alone. CDC studies showed that nearly half of women are overweight or obese before they become pregnant. At 230 pounds, I fall into the more than one-third (36.5 percent) of U.S. adults that struggle with obesity, and being obese during pregnancy is dangerous. It’s no secret that while pregnant obesity can contribute to gestational diabetes, but I had no idea that it could also cause birth defects or stillbirth. Between my husband and I, we might outweigh a baby elephant.

I’m also over the age of 35, which, by medical standards, designates me a high-risk pregnancy. At a whopping 37 years old, I’m more likely to develop high blood pressure and other pregnancy-related disorders. Combine my age with my weight, and I’m a pressure cooker.

Despite my efforts at practicing pregnancy mindfulness and pursuing my physical fitness, science (and fiction) has conditioned me to believe in the limitations of my fragility. Being overweight constantly reminds me of my mortality. Would I eventually end up a statistic like one of the four million obesity-related deaths reported in 2015 alone? And being heavy and pregnant would raise the stakes, like causing preeclampsia or blood clotting.

Being 'plus-size' reminded me of who I was, and I wasn’t sure I was ready to give that up.

Over the years, I’ve grown to accept my body, freckled and chubby as it is. I adore the dimples in my thighs, the stretch marks on my butt, and my arm’s soft underbelly. Losing the weight in order to get pregnant revealed my deeper fear of becoming a parent, specifically how much of myself I’d have to give up, specifically my body, which I’ve grown to love. Being "plus-size" reminded me of who I was, and I wasn’t sure I was ready to give that up (for anyone).

At 11 years old, I was already heavier than all the other girls. I had large breasts and my period. I was taller and athletic. For years, I was picked on for being larger than my classmates. I was picked on throughout elementary, middle, and high school. I hated looking at myself in the mirror. My stomach knotted each time the alarm clock went off because I knew the horrors that would be waiting for me at school.

At 16, I approached 190 pounds. As the harassment at school continued without pause, I became incredibly conscious not only about the way I looked but that perhaps I was less than, not worthy of the same treatment as my peers as a result of my weight.

I dropped 50 pounds. I looked amazing, but felt sad and ashamed of the route I took to lose the weight, to rid myself of the bullying.

I experimented with so many types of diets: the egg and black coffee diet, the water-only diet, and the one-meal-per-day diet. I lost weight and then gained it back. Finally, I resorted to extreme measures. At 17, I incorporated vomiting after every meal as part of my daily mealtime routine. I dropped 50 pounds. I looked amazing, but felt sad and ashamed of the route I took to lose the weight, to rid myself of the bullying and torment I faced at school, the rejection I faced from guys and the eyes of the world.

When I got to college, I was so paranoid of gaining all the weight back that I kept myself on a 500-calorie-per-day diet. I exercised more than an hour each day: 30 minutes in the morning and then weight training at night. I lived off protein bars and Lean Cuisines. I refused alcohol and any invites where I knew there'd be food. I even had a nightmare that I ate a whole box of chocolates and gained all the weight back. These weight-gain dreams were recurring.

I lived my life based on my weight and counted every fluctuation on the scale. If I gained even a half a pound, I starved myself until it melted away. Each day became a reminder that my looks were on trial. I had barely any friends, and I left for home each weekend.

By the end of the year, I was at my lowest weight: 130 pounds. While this seems like a normal weight for someone who is only 5-foot-3, it took extreme measures to keep me there. For years, I maintained this unrealistic weight — and by unrealistic, I'm referring to the unhealthy habits that kept me there.

Now, at 230 pounds, I'm the heaviest and happiest I've ever been. I'm writing all the books I've dreamed of writing at my youngest and thinnest of weights. I'm exercising again, and eating peaches and pears and homemade soups and salads. I have great sex with my husband and catch myself smiling at various intervals throughout the day, for no reason.

But recently this contentment is overshadowed by my desire to get pregnant, so I gave in and met with a dietician to help structure a meal and work-out plan that would help me shed the weight. It was a small office with a leading doctor and Diane the dietician who appeared to be in her mid forties. She had frizzy brown hair and her desk was with covered in empty protein shake boxes.

“You told the doctor no surgery,” Diane said, sipping from her extra-large water bottle. “Why not? You’re a great candidate.”

“I’m not into surgery unless I really need it,” I said.

“I mean you're 96 pounds overweight,” she said. “And the doctor said you are also trying to get pregnant.”

Ninety-six pounds was almost 100. I need to lose close to 100 pounds to be at my healthy weight of around 130 pounds. When she said that, I felt like I was tasked with hauling a tiny house up Mount Everest with only a rubber band and a paper clip.

“Gosh I feel so fat right now,” the words were heavy in my mouth.

“You can do this, Loren,” she said. “And if you lose 25 pounds and get pregnant, you can keep losing the weight.”

Diane was right. Many plus-size women lose weight during pregnancy as a result of morning sickness. But the idea of getting trim this way was discouraging. The joys of trying to get pregnant were diminishing.

So, the last few months I decided to let go, to not be a prisoner to diet fads and self-inflicted bouts of starvation. I'm a size 18 and happy. I'm writing, gardening, cooking, and in the best relationship of my life with my best friend.

I've stopped criticizing every aspect of my body in the mirror. I'm stopped contributing to the negative voices in my head, and I'm done with hurting my insides just to fit some nonexistent pre-pregnancy pre-mommy mold, which really doesn't exist. I’m ready to be a fat mom.