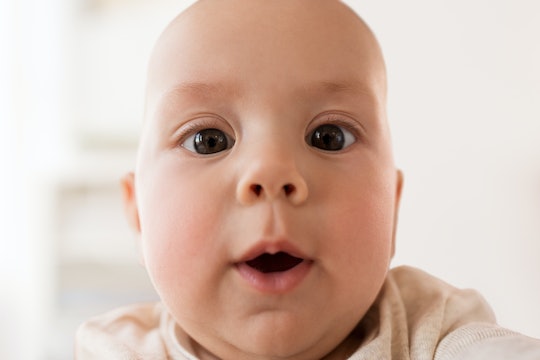 Hiccups are a normal and natural part of your baby's development. Even before they were born, they were hiccuping in utero (which you probably felt at some point). But it's different when you actually see your newborn get a fit of hiccups: It looks like their whole body is spasming, and that can be worrying. Especially if it's happening multiple times a day. But there are some things you should never do to try to get rid of your baby's hiccups.

But first: what are hiccups, anyway? Turns out, they're very mysterious — no one is quite sure why they happen, said Today's Parent. One theory is that they act as a "burping mechanism" to help babies take in more milk, explained the site. And occasionally they can be a symptom of gastroesophageal reflux, according to The Bump.

But even though we don't understand the cause, we know what hiccups are: "They're sudden contractions of the diaphragm caused by irritation or stimulation of the muscle," explained BabyCenter, and it's very common for babies to get them after or during feeding.

But whatever causes hiccups, they're very rarely anything to worry about. Even though you might hate the feeling of hiccups when you get them, that doesn't mean your baby feels the same way, explained Healthline. Not only do hiccups have very little effect on a baby's breathing, but many babies can sleep peacefully right through them. (Of course, if you're worried, or if the hiccups seem to be causing your baby distress, then do contact your pediatrician.)

So the best advice is to just wait it out and let the hiccups run their course. But if you're still determined to try and get them to stop, just make sure you're not trying any of these tactics.