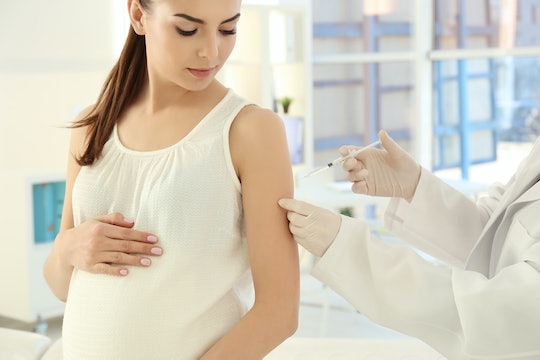 Study: Getting The Flu Vaccine During Pregnancy Won't Hurt Your Baby, Despite Myths

Some days, it feels like this flu season is going to last forever. And the truth is, seasonal flu activity can continue into May, so there could still be weeks to go before the current flu season is over in the United States. But there's a little bit of good news in the midst of all the scary and sad recent news stories about influenza season in the U.S. Getting the flu vaccine during pregnancy won't hurt your baby, according to a new study, so pregnant women should absolutely consider getting it this season or for future flu seasons.

Researchers analyzed the records of more than 400,000 infants born between 2004 and 2014, and discovered no increased risk of infant hospitalization or death after "maternal inoculation during pregnancy with either the flu vaccine or Tdap (tetanus-diphtheria-pertussis, or whooping cough) vaccine," according to U.S. News & World Report. The babies were followed through 6 months of life to better prove that a mother's exposure to those vaccines during pregnancy does not negatively impact their newborn child/children.

Since the CDC recommends that everyone who is 6 months of age or older get a seasonal flu vaccine, the findings are important news for women who may be worried about any effects of the vaccination on their unborn baby.

At least one of the researchers behind the study said the results were not a surprise. Study author Dr. Lakshmi Sukumaran, a pediatric infectious disease researcher with the U.S. Centers for Disease Control and Prevention, told U.S. News & World Report:

We didn't expect to find any increased risk in these infants. We wanted to do this study because pregnant women are especially concerned about how any exposures during pregnancy could negatively impact their children.

We wanted to provide reassurance that these vaccines, which are recommended for every woman during pregnancy, aren't creating a risk for the baby.

The news is definitely very welcome during a flu season in which the levels of influenza-like illnesses are currently as high as the peak of the swine flu epidemic back in 2009, according to Fortune. There's really no end in sight at the moment, so arming people with information that may help to keep more of them from contracting the flu, in this case more pregnant women, can only be a good thing.

As of Friday, CNN reported that the total number of children reported to have died from flu-related causes in the U.S. since October rose to 84 kids. And the CDC reported a total number of 19,398 laboratory-confirmed influenza-associated hospitalizations between Oct. 1, 2017 and Feb. 10, 2018. Anne Schuchat, the U.S. Centers for Disease Control and Prevention’s acting director, said of the current flu season, according to CNN:

This is a difficult season, and we can’t predict how much longer the severe season will last.

There's no question that this flu season has been a tough one in the U.S., and pregnant woman should take this new study into account if they're at all worried about getting a flu shot to try to avoid catching the illness as the season continues. Sukumaran told U.S. News & World Report that when it comes to pregnant women considering the flu vaccination:

The flu vaccine is recommended at any point during pregnancy...It's not too late to get the vaccine this season.

And frankly, the information is good to have for future flu seasons as well. The study looked at thousands of infants over several years, and the results prove that it's safe for women who are pregnant to get the vaccine during any flu season, not just the current one, if their concerns involve their baby's health being affected by the vaccination.

Of course, every person is different, and it's always best to talk to your doctor if you're pregnant and concerned about any treatment or activity that could impact your unborn baby. They will understand your situation more personally and be able to tailor their recommendations to it.

However, in general, this study offers good news when it comes to recommending vaccinations to more people to help protect them against the flu, and in regards to the health and wellbeing of pregnant mothers, their unborn children, and newborns. And of course, any advancement in protecting the health of moms and babies is always welcome.