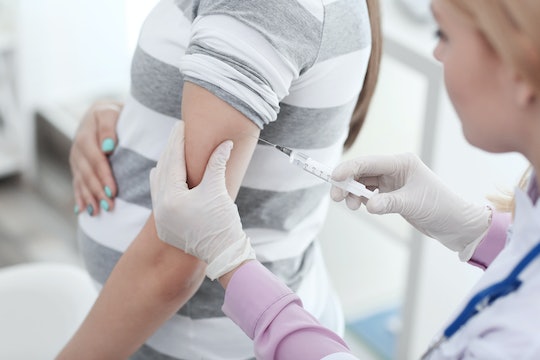 Moms Can Easily Prevent Whooping Cough, So Why Aren’t We?

As a parent, you want to make sure you're doing everything possible to keep your newborn happy, healthy, and safe. In fact, getting vaccinated before birth can protect your baby in the first few months of their life. So why aren't more moms doing it?

A new U.S. Centers for Disease Control and Prevention study found that three out of four cases of pertussis — otherwise known as whooping cough —can be prevented in newborns younger than two months old if parents-to-be receive the T-Dap vaccine in the third trimester. However, CDC researchers discovered that only 49 percent of pregnant people who gave birth during fall 2015 and spring 2016 were vaccinated against whooping cough, according to Central Illinois Proud.

And, up to 20 newborns die each year in the United States from whooping cough, while half of children under age 1 who get pertussis need hospital treatment, according to the CDC. The federal health agency also reported that whooping cough rates decreased by 37 percent between 2014 and 2015, from 32,971 to 20,762 cases; however, the majority of pertussis-related deaths that occurred in 2015 were among newborns under 3 months old. Overall, the incidence rate of whooping cough is highest among babies, according to the CDC.

On average, symptoms of whooping cough develop within five to 10 days after exposure, according to the CDC. In addition to coughing fits, people with pertussis will experience a runny nose and fever in the early stages; later-stage symptoms include vomiting and exhaustion after coughing fits. However, the CDC noted, many babies with pertussis do not cough at all; instead, they will stop breathing and turn blue.

These sobering facts on pertussis infections highlight why parents-to-be should receive the T-Dap vaccine prior to giving birth. But how does getting the vaccination during the last months of pregnancy actually protect your little one from pertussis? Dr. Michael Leonardi, director of Obstetrics of OSF Saint Francis Medical Center, explained to Central Illinois Proud,

All the antibodies that the mom makes to protect herself and her pregnancy from Pertussis cross the placenta late in pregnancy. So when the baby's born, it's sort of shipped out into the world with a little bubble of immunity to all the things the mom has ever been exposed to our vaccinated against.

Leonardi then added, according to Central Illinois Proud,

We know that the best way to protect newborns is by protecting them from the time they were in the womb.

So why do so many parents-to-be forgo receiving the T-Dap vaccine before giving birth, particularly during the 27th and 36th weeks of pregnancy? They may be under the impression that whooping cough is "a thing of the past," Dr. Emily Scott of Indiana University Health told Kron 4. Since there has been a general decrease in whooping cough rates, pregnant parents may not see the urgency in getting vaccinated, Scott said. But some part of the country are not seeing a decline in pertussis cases, even if there is an overall drop across the United States.

Indiana has actually doubled their whooping cough rate in the past year, from 2016 to 2017, so while it’s important for moms all across the U.S. to get vaccinated, in Indiana women should really pay special attention to making sure that shot gets done.

The recent CDC study, as well as a rebound in serious whooping cough cases, stress the importance of getting vaccinated both to protect your child and yourself. Although there's a growing anti-vaccination movement in the United States, enough scientific research exists to prove that immunization from diseases is a life-saver for everyone.