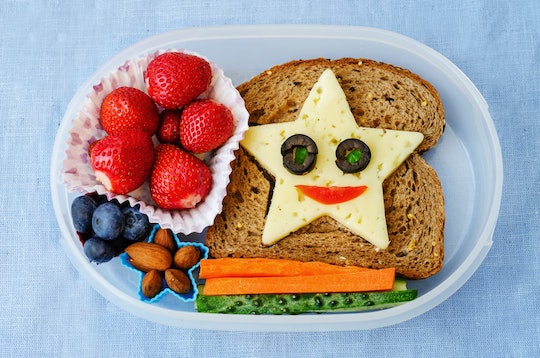 Getting Your Kids To Eat Healthier Might Be A Little Easier With This Hack, New Study Finds

Getting kids to eat healthy can be a real struggle, especially during the summer. Parents have been utilizing a number of neat tips and tricks to get kids to eat foods like vegetables or whole grains. And a new study has found that getting your kid to eat healthier with star-shaped food is more than just a business gimmick, it could actually work.

In a recent study presented at the 2018 European Congress on Obesity in Vienna, Austria, researchers developed a visually attractive whole-grain bread based on public health recommendations for salt and fiber, as reported by Medical Xpress. Researchers highlighted salt and fiber content for the study because, according to Medical Xpress, the more fiber children eat "is related to healthier eating and better health outcomes, whereas the opposite is true for high salt consumption." That's true; as the American Academy of Pediatrics explains, "​Fiber is an important nutrient that most children (and parents) are not getting enough of each day." (Here's a list of healthy food and good sources of fiber from the AAP.)

Thirty eight children ranging from the ages of 6 to 10 were asked to evaluate the bread based on its shape, symmetry, and color. On a scale from one to five — best to worst, respectively — children showed preference for star-shaped versions of the bread versus the regular square-shaped versions, with respective scores of 1.5 and 2.0, according to the study's findings.

"We conclude that based on these results, children like an attractive child-oriented bread style, in this case a star-shape," the study's authors concluded, according to The Economic Times. "Modifying healthy everyday foods in this manner to make them more attractive to children could help children make healthier food choices."

So, parents, for all those times you put extra effort into making interestingly shaped food for your kids, you were definitely onto something.

While the study focused on star-shaped food, it's not that stars alone hold a special power to draw kids in. "Focusing on taste and product attractiveness might help children and their parents make healthier food choices," Medical Xpress noted. In other words: don't feel restricted by shape. It's all about making food fun and enjoyable for your kids.

Although science is just beginning to back up the idea of making food fun, the concept obviously isn't new. Some fast food restaurants feature chicken stars on their menus, which are chicken nuggets shaped like stars. And does anyone else remember those smiley-face french fries that were king of the freezer?

The only issue with pre-made star-shaped and general children-friendly food is that, right now, the market largely focuses on food items that aren't the healthiest. From chicken nuggets to french fries to boxes of special edition mac 'n cheese, those might be fine for the occasional meal but they don't make a balanced diet by themselves.

But, as this study shows, there's no reason parents and caregivers can't take their own fun to menu items that usually make kids complain. For example, the classic snack of peanut butter smeared on celery sticks then topped with raisins (aka, ants on a log) is a great example of how a "boring" snack can be made into something fun, and interactive, for kids.

For anyone wondering how, exactly, to achieve stars and other shapes, no fear! Cookie cutters are great for cutting fruits into fun shapes. They're also generally safe enough for kids to use. (Here's a kid-friendly set on Amazon with various sizes for just $6.50) Bringing kids into the process of making snacks might elongate the process, but it allows your kid to get familiar with and take some pride in the food that they're eating. And aside from whole grains, other great sources of fiber, and shapeable foods, for kids include apples and pears.

Parents commonly tell children not the play with their food. And, while kids should learn skills needed to eat without making a huge mess, a little play can be a good thing. As noted by the Daily Meal, kids are naturally suspicious of new foods — they haven't tried them and they don't have any more life experience than that to fall back on.

Although it admittedly takes a more time to turn your kid's lunch into stars, by giving them plates that are vibrant, fun, and overall kid-friendly, it can help transform some of that meal-time angst into something kids can look forward to and hopefully will encourage healthier food choices later in life, too.