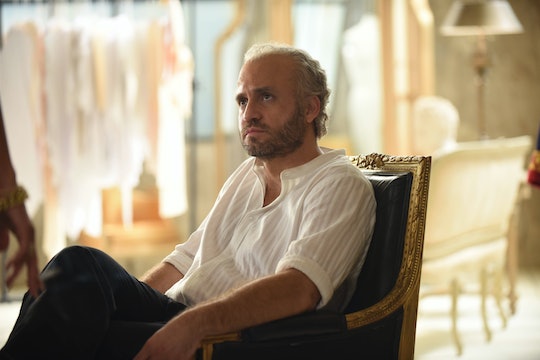 In "Don't Ask Don't Tell," The Assassination of Gianni Versace will contrast Jeff Trail being forced to remain in the closet to maintain his military career with Gianni Versace's decision to be open about his sexuality with the public, something that was risky at the time. Based on the episode description, the show will depict Gianni Versace's coming out interview where he "reveals his sexuality to the world" with his partner Antonio D'Amico by his side. Not only did this interview serve as an inspiring moment for young gay people, but it also inspired some of the people who work on American Crime Story, as well.

It's unfortunately rather difficult to get ahold of the original interview that Versace did with The Advocate, at least online; the exact issue and release date is unclear as well, so it could prove to be difficult to even track down a hard copy. But its impact is still deeply felt, particularly for Ryan Murphy, who talked to Deadline about how important Versace's coming out was for him. "I admired that and always did," Murphy said. "I loved him and looked up to him, and was so proud and excited when he did that interview in the Advocate. At that time there weren't a lot of people brave enough to live their lives in the open."

Perhaps the reason it's not easy to find that one specific interview with Versace is that he seems to have been very open about being gay from the start of his career. Deborah Ball, author of the book House of Versace, discussed Versace's openness with The Advocate by comparing him to one of his contemporaries. According to her, Giorgio Armani had been relatively private and his partners were rarely in the public eye, "whereas Gianni was happy to do joint interviews with Antonio very early on." She added, "Gianni was ten years younger than Armani, so that probably made a difference in how comfortable they felt in talking about their sexuality."

That was something D'Amico spoke about with The Guardian recently as well. "We lived like a natural couple, there was never a problem," he said. "It was the right moment for him to come out in public, but everyone involved in our world knew. He never tried to hide who he was."

Versace's philosophy about fashion and life, at least as depicted on American Crime Story, is all about celebration, living life to the fullest, and breaking barriers. That struggle to be authentic despite what the world throws at you is an important theme of The Assassination of Gianni Versace, and the fact that Versace managed to do so during the time he lived isn't just impressive — it was incredibly brave.

Executive producer Nina Jacobson remarked on that to INTO, discussing "the courage of Versace's heroism, which I didn't realize, really. When you put him in a timeline, the only other designers who were out were dead, and they were out because they died of AIDS. He chose to come out at a time when Ellen wasn't out yet. It was a very different time."

In addition to having an impact on Murphy, filming Versace's coming out affected series star Ricky Martin as well. In an interview with Us Weekly, he talked about the relevance of Versace's journey to his own life, and how much things changed in the 20 years following Versace's death.

I'm a gay man that lived in the closet for many years. To see the process of Gianni actually coming out and sitting down in front of a journalist to talk about his reality is something that moved me in many ways. Even though everybody knew about the relationship with Antonio, the fact that they couldn't be as open as I am right now with my relationship is something that really frustrates me.

Versace's coming out was an important moment that contributed to his legacy, and recognizing that on The Assassination of Gianni Versace honors the influence he had on his community, and the world.