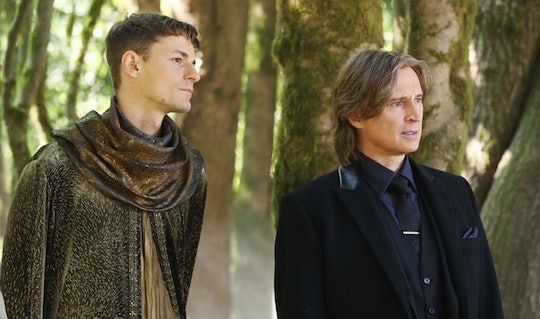 Well that was unexpected. As usual the Once Upon a Time Season 6 winter finale packed it usual punch of fairytale antics and hijinks, but there was a greater reveal at the end of the hour that left everyone's jaws on the floor. All season fans have been wondering who is person under the hood that appears to kill Emma in her visions of the future. And Sunday night's episode finally gave us an answer. Gideon is the hooded figure on Once Upon a Time and it's a twist I don't think anyone expected.

Yes, I am referring to the Gideon, as in Rumple and Belle's newborn son who was just taken away last week to be protected from Rumple's reach. Except this isn't a little baby that we see coming out from under the hood. (That would be more adorable than shocking.) This is the grown up version of Gideon, who Belle has met in multiple dreams. However, he isn't so kind and sweet anymore. He has big plans now that's arrived out of a portal in Storybrooke and one of those plans involves killing the Savior, Emma Swan. (I guess he's taking more after his father in adulthood, my friends.)

But let's not bypass the most pivotal plot point in this story arc: how is Gideon already an adult when he was literally just born a few days ago? That's because the Blue Fairy's plan to take him away and look after him somewhere safe went horribly wrong. The baby was taken by the Black Fairy aka Rumple's mother. And since time evidently works differently in her world, I suppose this is meant to help explain how he was able to grow up so fast. And since Rumple's dad was Peter Pan (someone who refused to age at all), you have to appreciate the irony of this.

Right now it's unclear why exactly Gideon has been trained to go after Emma. Does the Black Fairy hope to steal her magic? Was she wronged by the Savior in some way we have yet to learn about? I have to believe Gideon is doing this at her behest since he's never even met Emma at all. But whatever the reason may be, Emma seems to be in more trouble than ever. The identity of the hooded figure may have been revealed, but Storybrooke's problems are still far from over.