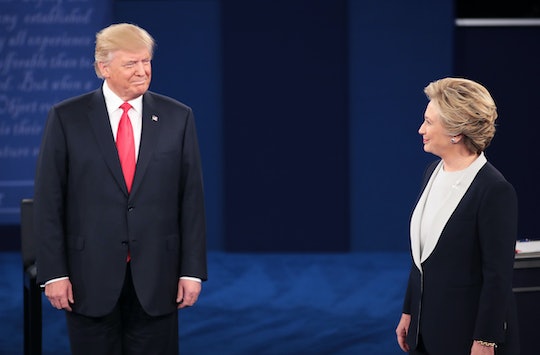 Sunday's debate was long promised to be a lively one, but the recently leaked audio of Donald Trump seemingly bragging about sexually assaulting women, coupled with his surprise press conference with President Bill Clinton's former accusers, raised the stakes astronomically. But this GIF of Hillary Clinton and Donald Trump’s entrance to the second presidential debate show that both candidates are still full of confidence. Clinton strode out full of smiles (cue the Twitter uproar), while Trump, despite his weird side-step move, seemed to be wearing something resembling a human smile.

Is all this confidence misplaced? Trump previously received criticism for failing to prepare for the first presidential debate, while Clinton, oddly enough, was criticized because she did prepare. Did Trump do his homework this time, or is he hoping to derail the debate by mounting an attack on the former president, who isn't actually a candidate in this race? At any rate, Clinton seemed truly at ease on the town hall stage, while Trump, a man who's made a career out of being in the spotlight, was a little off. Perhaps he was unprepared for the distance he had to walk? It's surprising that a former reality TV star wasn't able to hit his mark.

Many viewers were surprised that the candidates didn't shake hands at the start of the debate; Clinton's nod of "Hello" could be interpreted as a snub. A snub would be understandable, though, given that just an hour before the debate began, Trump trotted out three living, breathing skeletons from Clinton's husband's closet (and one from hers) and then paraded them into the debate itself. Clinton may not have gotten psyched out as Trump intended, but it's more than reasonable to expect her to be a degree or two chillier than usual.

The pair did eventually shake hands at the end of the debate, however. The final question, posed to both candidates, asked them to name one quality that they respected about their opponent. Trump was offered the first chance to respond, but seemed to be temporarily dumbstruck, so Clinton jumped in, saying that she liked Trump's children. "His children are incredibly able and devoted, and I think that says a lot about Donald," she said. Given how vocal Trump and his ex-wives have been about his hands-off parenting, that statement could be a wink at how well their mothers raised them. Trump, meanwhile, said he respects that Clinton is a fighter who "doesn't quit and doesn't give up." One wonders just how tightly they gripped each other's hands at 10:30.