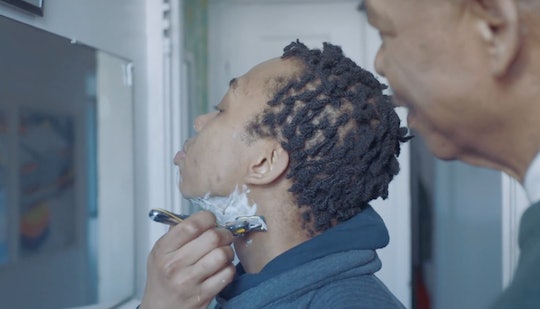 The current administration may be focused on stripping the rights of LGBTQ people, but an increasing number of companies are coming out in support of the community in a major way. Most recently, Gillette embraced trans folks with a new commercial. The Gillette ad shows a trans teen's first shave and it'll most definitely melt your heart, especially after you see its star's response to having his story shared.

In the commercial, a young trans boy named Samson Brown can be seen learning how to properly shave with his dad. Gillette released the video early this week, according to Gay Star News. They captioned the video, "Whenever, wherever, however it happens — your first shave is special." In the clip, Brown talks about reaching a point where he's "actually happy" after a long transition process. He added that it's no longer him that's changing, but rather those around him. Brown responded to the commercial on social media, thanking Gillette "For allowing me to share such an important moment in a man's life with my father." He added that he was excited about "the great things you're going to continue doing," using the hashtag "#MyBestSelf." Gillette responded, thanking him for sharing his story with them and all who will see the commercial.

"We're honored to showcase this special moment between you and your father and are proud to have you as a partner," the company said. "Thank you for your courage and confidence in sharing your journey to becoming your best self!"

This isn't the first time Gillette has taken a stand on an important issue. In January, the shaving company released a commercial about toxic masculinity amid the #MeToo movement, according to The Guardian. In it, the company showed news snippets reporting on the #MeToo movement, and images of sexism, bullying and violence. "Is this the best a man can get?" Gillette questioned in the ad. (The tagline is a play on the company's 30-year-old slogan, "The Best a Man Can Get.") The company was praised by many for daring to go there, but some felt it was a step too far. Actor James Woods — a known supporter of Donald Trump — accused Gillette of "jumping on the 'men are horrible' campaign." He, along with others with similar views, vowed to boycott the company.

In general, companies shouldn't capitalize on movements for profit. There is, however, space for brands to start conversations, which is what Gillette has been doing with their advertisements. While they're taking some heat for it, most have applauded them for speaking up for what's right. In these trying times, these small displays of support and normalization are so important. I, for one, hope to see more stories like these shared by Gillette and other such companies.