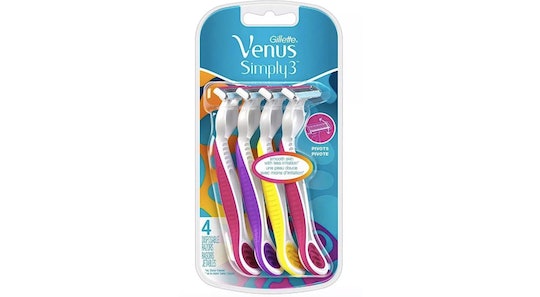 Everything You Need To Know About Gillette's Disposable Razor Recall

There's nothing worse than shaving with a dull razor. Not only are your hairs literally ripped out of your legs (apologies for the intense imagery, folks) but don't even get me started on what can happen if your razor is a little too sharp. And speaking of sharp razors, Gillette is recalling disposable razors for uneven blades, an announcement that couldn't come at a worse time for those who are looking hit the beach sans body hair. The good news? There's an easy way to find out whether or not your razors are involved in the recall.

The thought of uneven blades might be alarming to some, so let me get down to the nitty gritty of this recall right away. First off, it’s important to know what type of razors were recalled and why. As ABC News reported, the recall affects Venus Simply3 Disposable Razors and the Venus Daisy 12 plus 1 Venus Simply3 Bonus Pack, as the razor blades were reportedly misaligned during manufacturing and can cause lacerations during normal use. So far, more than 87,000 packages have been recalled nationally, in addition to 2,700 that were sold in Canada, according to a press release from Gillette.

The affected products come in pink, purple, and yellow, and are featured in two different packages. The razors in question were sold between January 2019 through May 2019 for $6 and $10 a piece, and were manufactured in Mexico, according to the Consumer Product Safety Commission (CPSC).

The full list of products affected include, according to the company's press release:

"Our priority is the safety and confidence of the millions of women who trust us with their personal care needs," Gillette said in an official statement about the recall, according to Fortune. "While this is a very small amount out of over 3 million razors produced each month, we have decided to replace any potentially impacted Venus Simply 3 disposable razors produced during this limited timeframe."

Gillette did not not immediately respond to Romper’s request for further comment regarding the recall.

Any further questions can be directed to the Venus Consumer Care Team at 800-362-1258 Monday through Friday from 9 a.m. to 6 p.m. ET, according to NBC News Washington.

Of course, shaving can be an important grooming practice for people, so there’s a good chance many consumers have checked their razors since news of this recall first broke. In fact, the average woman will shave more than 7,000 times and spend $10,000 related products, according to Glamour. Pretty interesting, right?

Stats aside, there has been a frighteningly high number of recalls this year, but most have been related to food. And considering recalls involving razors are few and far in between, it’s understandable that some people might have concerns, so don’t hesitate to reach out to Gillette if you have any lingering questions.