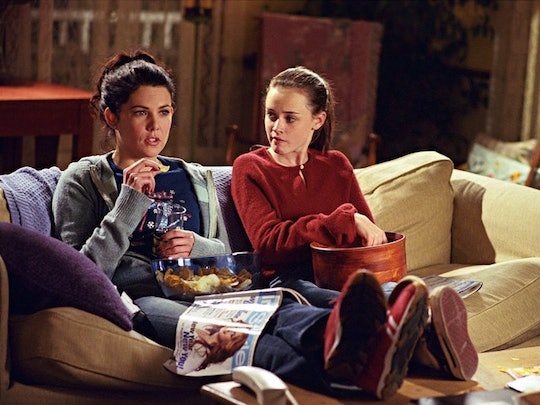 If Netflix wasn't already the greatest invention since coffee, this news will make you bow down to the Netflix gods. Variety reported on Friday that Netflix confirmed a Gilmore Girls revival. Original cast members, including the girls themselves, Lauren Graham (Lorelai), and Alexis Bledel (Rory) will reprise their roles along with Scott Patterson (Luke), Kelly Bishop (Emily), Sean Gunn (Kirk), and Keiko Agena (Lane). Creator Amy Sherman-Palladino and her husband Daniel, who wrote and directed several episodes, are also returning for this Gilmore Girls 2.0, which will give fans new episodes to stream, rather than watching old faves. The revival will reportedly be called Gilmore Girls: Seasons, and will feature four 90-minute episodes, according to BuzzFeed.

Stars Hollow is back, and filled with some new characters as well as the OG Gilmore Girls, according to E! News. What's so great about this revival story is that the nostalgia and fans really made it happen. Danny Strong (Doyle McCaster) told E! Online:

The show has only grown since we've been off the air and people love it so much. So it's so neat seeing all these people that we have this bond with, and it's over something that's only become bigger. That was really cool.

To celebrate the news, Graham posted on Twitter, giving fans even more reason to love Netflix.

According to TVLine, which broke the story, each 90-minute "episode will represent a different season over the course of a calendar year." So, imagine the series divided up into chapters: one for fall, winter, spring, and summer.

No news yet on when the series will reboot. Aside from the name, there's no further information about how the plot will unfold. And, no word yet on how everyone's favorite mother-daughter duo, and the people who make their lives one long adventure, will reprise their roles.