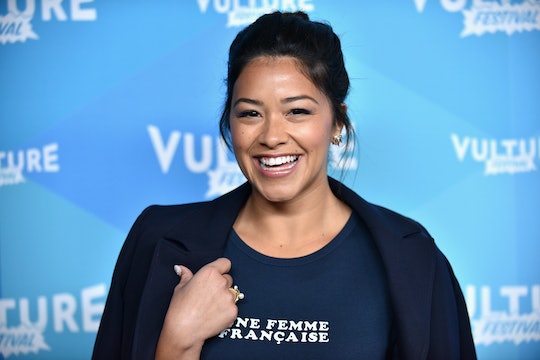 There is a lot of negativity in the world, that's for sure. Every single day, our lives are flooded with bad news, anonymous trolls on the internet, and more. But sometimes, there are rays of sunshine that manage to peek through all the darkness. Beyoncé, for example, basically makes everyone's days a little better when she posts to Instagram. As do puppies, babies making funny faces, and everything Ellen DeGeneres tweets. And now, a certain goddess/actress is stepping on to the scene (again) to make sure her fans are feeling confident. Yep, Gina Rodriguez is complimenting fans on Twitter, and its the best thing ever.

Wednesday afternoon, Rodriguez took to Twitter to respond to a fan who had tweeted her a selfie. "You look more like my sister than my two sisters do!" Rodriguez replied, continuing, "Where you from? Who's yo mama?!?" Obviously, the actress was joking, but other fans soon followed suit, and Rodriguez hasn't discriminated in paying a compliment to as many wonderful selfies as she can. After Rodriguez tweeted out that "confidence is the most beautiful outfit on you," she replied to a plethora of fans, giving each of them a unique compliment and reason to feel fierce and beautiful in their own skin.

"Yaaasss queen," Rodriguez said to one fan. "So fly. Can you hook it up with that dope leather jacket polka dot combo?!?" And that's just the beginning. Rodriguez took a lot of time out of her day to make her fans feel empowered, and that's important.

Of course, this isn't the first time Rodriguez has taken to Twitter to talk about her passion for self-love and body positivity. She has responded to fans on the social media site many a time, always with a message of love and hope.

And seriously, while it might seem like society has come a long way in terms of confidence and self-worth, things still aren't perfect. And with online trolls on the rise, it's refreshing to see women building each other up, rather than the opposite.

Rodriguez has always been passionate about inspiring young women, telling TV Guide back in 2014,

Now I can talk to more girls and tell them that any skin color, any economic background, any shape they were born into is perfect and right and strong and beautiful and enough because I'm sitting here, not the stereotype.

And clearly, she's doing just that. Seriously, Rodriguez's latest Twitter-compliment spree is sweet, for sure, but it's also perfectly in character with who the actress is: a total sweetheart.