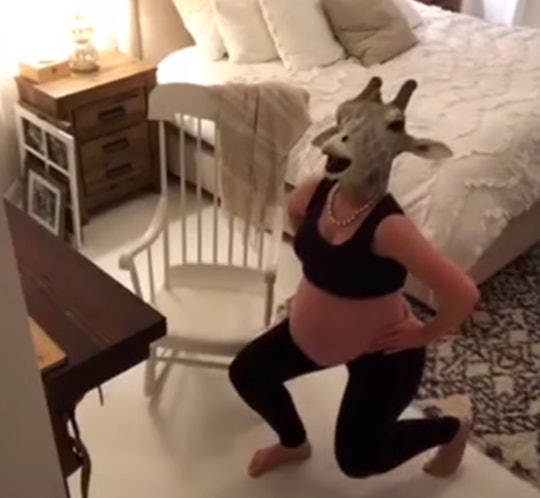 Remember Erin Dietrich, a.k.a. "giraffe mom"? The expectant mom gained viral internet fame on March 5 after donning a giraffe mask and spoofing a zoo's livestream of their pregnant giraffe, April. Now, the "giraffe livestream" mom has given birth to her son, and her birth announcement is on point. (And in case you're wondering: yes, she beat April to giving birth.)

Dietrich and her husband Scott decided to film their first giraffe video after Dietrich's friends made fun of her obsession with Animal Adventure Park's livestream of April. The New York animal park has been running a livestream of April in the days leading up to her calf's birth, and Dietrich was due around the same time.

"I did not think this many people would get a kick out of this," Dietrich wrote on Facebook after 31 million people tuned into the video. "All our friends have been making fun of me and my obsession with April so we just thought 'hey we should order a giraffe mask.'"

"He's here!! He is perfect, healthy and just beautiful! Our sweet Porter Lane arrived at 6:11pm tonight," Dietrich wrote on Facebook. "Our hearts are overflowing. Thank you so much for ALL the love and prayers! XOXO."

The picture quickly received over 47 thousand reactions and was shared widely. Even Animal Adventure Park fired off a congratulatory message to the Dietrichs on Facebook, writing:

A quick congrats on the giraffe mask wearing mom; and her new son! April doesn't appreciate the extra pressure, but she will get over it! Congrats to you Erin and your family!

Dietrich and her husband are already parents to three children, who range from 2 to 7 years old. She told Today that she would check on April when her pregnancy kept her up at night. "It's the most ridiculous thing, but in the middle of the night when I couldn't sleep, I'd be like, 'Oh, let me check on April and see if she's had her baby yet,'" she said. "We are praying for April, and hoping she has her baby soon, too!"

Once April's calf is born, I hope a visit to Animal Adventure Park is in order for the Dietrichs. How cute would a selfie of April, her calf, Dietrich, and Porter be? (Hint, hint, Dietrich.)