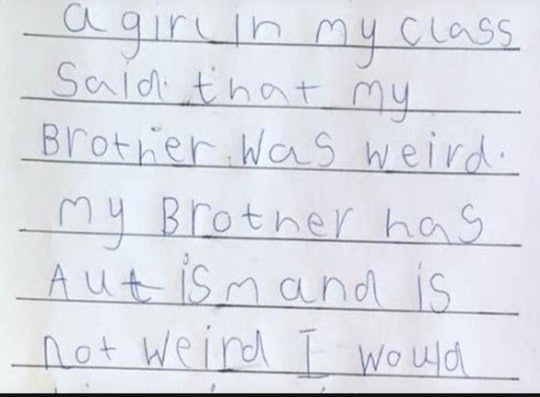 Girl Defends Brother With Autism & Teaches Everyone An Important Lesson

Amid all the hysteria about whether vaccines cause autism (they don't) and the efforts to determine what does cause the condition and to eradicate it, there's something we frequently forget about the girls and boys and men and women who fall on the spectrum: They're people who have thoughts and feelings and aspirations and families who love them, too, and they don't necessarily need or want to be "fixed." That's what one British 6-year-old wanted everyone to know when she wrote a letter to her school defending her brother with autism and encouraging her teaches and classmates to learn more about people living with disabilities. For Lex Camilleri, autism doesn't make her older brother strange — it makes him who he is.

It all started when a girl in Lex's class said that her 9-year-old brother, Frank, was "weird." Quite simply, that made her sad, and so she wrote a letter (with spelling help from her mom) to the student council.

"On Monday I felt very sad because a girl in my class said my brother was weird," she wrote in the letter her mom, Sophie Camilleri, soon shared on Facebook. "My brother has autism and is not weird. I would like it if we could learn about all disabilities in schools so that everybody understands that some people are different, but we should all be treated the same."

Because Lex's instinct, surely, was that if more people understood her brother the way she does, the more accepting of him they would be. In fact, Lex read the letter to her class, her teacher asked the children whether they knew about autism, and not one of them did, according to ABC News — even though Autism Speaks representative Lisa Goring told the outlet that 1 in 68 kids in schools in the United States is diagnosed with some form of autism.

"Frank is older than her and that's all she's ever known," Sophie Camilleri told ABC News. "She's only known autism so she doesn't see it as different. She's lived and breathed in from the beginning. That's just how it is."

Of course, many children don't have autism or grow up with a sibling who does, so the idiosyncrasies that those who do have autism sometimes exhibit may strike them as "weird."

And by encouraging everyone at her school to make an effort to get educated about what autism is and what having it means, Lex is acknowledging without in any way insinuating that it's her brother who should change. There are books about it kids can read to better understand classmates like Frank, and their parents and guardians can discuss it with them, too. But, as Lex knows, perhaps the best way to get the word out is to build it into the curriculum so students can all get on the same page — and really get to know the kids in their school who are maybe a little bit different than they are, but who are really kids just like them.