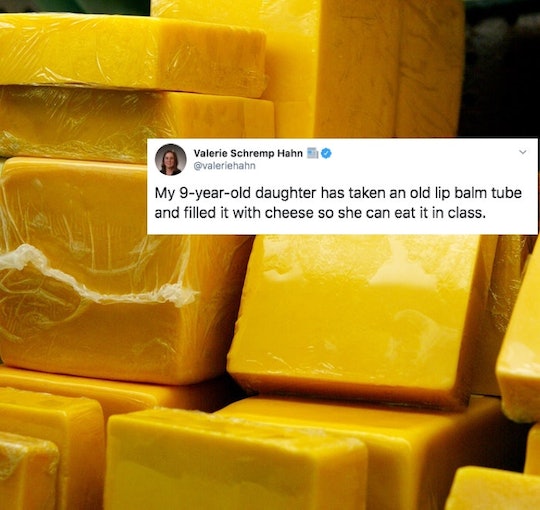 The internet has been officially rocked by one St. Louis fourth-grader's ingenious way to sneak a snack into the classroom. In fact, the young girl's chapstick tube filled with cheese may take the prize for being the ultimate, cleverest on-the-go snack. Can you say, patent pending?

We've all been there at one time or another; you're in a in a meeting that's run too long, or stuck at a conference, or even in a class when hunger strikes. Unable to discreetly sneak a snack, you suffer. But thankfully, there's a budding ~*snackologist*~ in Missouri ready to solve the world's snacking problems with what BuzzFeed has reported she calls "cheese stick chapsticks."

Like any proud parent would, the girl's mother took to Twitter to brag about her daughter's clever idea. "My 9-year-old daughter has taken an old lip balm tube and filled it with cheese so she can eat it in class," Valerie Schremp Hahn, a features reporter for the St. Louis Post-Dispatch, tweeted.

Both Hahn and her daughter have since explained that the idea for "cheese stick chapsticks" was born after watching a Troom Troom compilation video about food-related school pranks on YouTube. "I was just looking on YouTube because I was bored and I found this video and I decided to do it," the girl, whose name was withheld at her mother's request, told BuzzFeed.

While the Troom Troom video suggested filling a glue stick with cheese, Hahn's daughter had to improvise when it became clear that her family didn't have a glue stick container lying around. "I just took some of my dad's cheese, sliced it up, and put it in the chapstick container," the clever girl told BuzzFeed.

Hahn said there was also some experimenting done to find the cheese best suited for life inside a chapstick container; according to TODAY, ultimately, after trying a couple different types of cheese, the 9-year-old went with sharp cheddar. "You have to slice the cheese and use the balm tube as kind of a cookie cutter to cut discs of cheese," Hahn told TODAY.

What's more, Hahn told TIME that this isn't her daughter's first foray into bringing the world tube-shaped snacks. "I know she experimented with making a popsicle in an old lip balm tube, but that was a fail," Hahn shared with the magazine.

While the popsicle lip balms may have been a failure, the cheese stick chapsticks ended up being a hit with the fourth-grader's friends. "At first I didn't tell them and I was like licking the, quote, 'cheese,' and then I told them it was cheese and they just started laughing so hard," she told BuzzFeed.

The fourth grader's cheesy invention was also a big hit on Twitter, with many users calling the young inventor a genius. "She is genius and will [be] the millionaire who takes care of you in your old age," one of Hahn's coworkers at the St. Louis Post-Dispatch tweeted.

"Further confirmation that the future is female," another user tweeted in response to Hahn's initial tweet.

Although it's unclear if Hahn's daughter will be approached by any of the big cheese manufacturing companies anytime soon (guys, what are you waiting for?), her invention has at the very least earned her "a shout-out" in her school's newsletter, according to a follow-up tweet from Hahn, and, of course, a sea of impressed, cheese-loving fans across social media. Well done, well done.