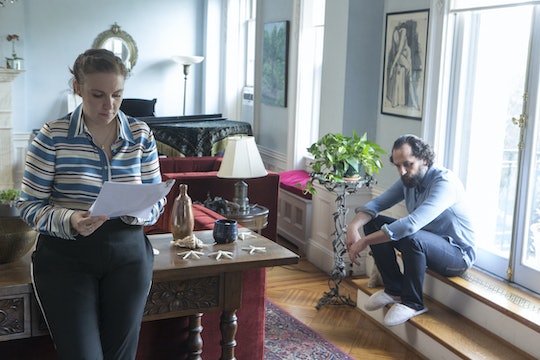 At least once a season (if not more), Girls will deliver a bottle episode that explores two characters on a journey of ups and downs as they have one long, revealing conversation. In "American Bitch," the show did that once again by following Hannah as she met with a famous writer named Chuck Palmer (played by Matthew Rhys), whom she had once admired, but recently skewered in an article after hearing about allegations made against him by several young women. In doing so, Girls delivered an important message about consent. It wasn't a cut and dry message, but one that took into account all of the messy and confusing moments that can occur in situations with a power differential.

Hannah and Chuck stood on opposite sides of a dividing issue, both dedicated to their perspective and their side of the story. Chuck had been accused by four different women of using his power and influence to coerce them into sex, though, according to him, the issue of consent was a "gray area." He had nothing but excuses, insisting that Hannah should be writing about things that mattered instead, that oral sex couldn't be forced, and that his own life was destroyed by these allegedly false allegations. These were all statements intended to deflect and to divert Hannah's sympathy to him instead of focusing on the women, but she was quick to correct him on every count. She made it clear that consent was something that was important and did matter, and that his life was far from ruined — he was still getting rave reviews, after all. His livelihood was intact.

However, the episode didn't just lay out important talking points. It explored the issue of consent head-on with Hannah and Chuck as he continued to manipulate her into agreeing with his side of things. She was aware of his manipulations, but still susceptible to them for the very reasons that made her so empathetic to the women he had coerced into sex. Hannah respected him. She had looked up to him for years. She was swayed by the remorse he seemed to have and unwillingly flattered by the compliments he lavished on her. He claimed the allegations were hearsay and Hannah didn't have all the facts; when relaying his version of one encounter, he even managed to make himself seem like the victim.

The episode showed exactly how Chuck managed to take advantage of the women who had spoken out against him. He was self-deprecating and overly complimentary, he played up his own position and took advantage of their respect for him. Then he put them in a situation where they didn't know how to react, which was exactly what he did to Hannah. He invited her to lay down with him while acting like it was non-sexual, then exposed himself to her. She was visibly uncomfortable and uncertain, but Chuck was unrepentant.

It exposed Chuck's excuses for exactly what they were: a smokescreen. He didn't really feel bad about what he had done, either to Hannah or the other women. He was able to say all the "right" things to make it seem like he was just misunderstood, but it was all totally disingenuous. He didn't really understand or care about the power he had as a hugely successful author over young women without the same reach or access. He only cared about himself and what people thought of him.

Chuck's behavior with Hannah also echoed a story she had told earlier in the episode about a teacher who made her feel special but constantly overstepped his boundaries physically with her. His praise made it difficult for her to untangle her feelings or even explain to other people what happened. It was a situation that left her feeling violated and had a continuing effect on her even as an adult. It never left her. The way Chuck treated her followed the same pattern and it was clear by the end of the episode that what happened with him wouldn't leave her either.

"American Bitch" dealt with how confusing and conflicting it is to be put in a situation where you don't have the power and don't know how to react. The episode was wholly on the side of the victims and didn't hold back when showing how insidious abusers can be.