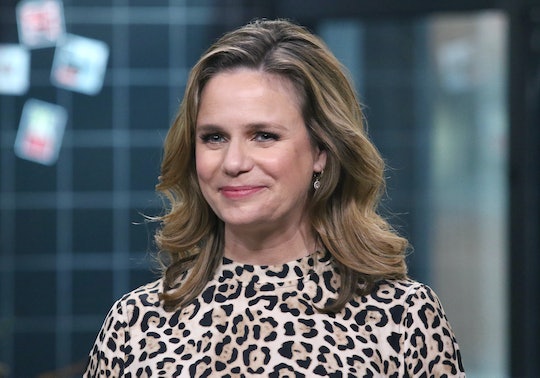 Every year ahead of Thanksgiving, elementary and pre-school kids are tasked with a common project. They're given a turkey cutout and instructed to create a "disguise" for their paper friend, so he'll avoid ending up as a Thanksgiving meal. The results are always adorable, and sometimes even hilarious. And one girl's incredible Kimmy Gibbler-disguised turkey was so clever, it even got Andrea Barber's stamp of approval.

On Nov. 23, a mom named Rebecca took to Twitter to share the result of a "disguise the turkey" project recently completed by her daughter. Instructions for the homework assignment read: "I NEED your help! The hunters have been trying to find me. I just know that they want to eat me for Thanksgiving dinner! You are my last chance to escape from these hunters. Will you PLEASE help me disguise myself? If you give me a disguise, then maybe the hunters will leave me alone. Please hurry before it's too late."

It's a pretty common take-home activity for young students to be assigned in November. However, the end result of Rebecca's daughter's project was anything but ordinary. "We can't wait for #FullerHouseSeason5! My daughter Shelby had to #DisguiseATurkey & chose @andreabarber's character #KimmyGibbler," she wrote. "The #NewKidsOnTheBlock episode is one of our favorites so we just had to recreate that iconic look!"

The turkey, of course, had flowing blond hair — along with Kimmy's multi-colored dress with "New Kids on the Block" written all over it, paired with a green cardigan.

It's oddly specific, yes, but the randomness of it all is exactly what makes this turkey truly amazing. Even the actress who plays Kimmy Gibbler, Andrea Barber, took note. "She disguised her turkey as Kimmy Gibbler?! AMAZING!! A+," Barber tweeted, alongside clapping-hand emojis.

Plenty of Twitter users fell in love with the Kimmy-Gibbler-inspired turkey disguise, as well. One person declared, "KIMMY GOBBLER!" Another Twitter user commented, "I love this on sooo many levels!" Yet another person commented, "I am suddenly disappointed in my children, who had the same project and disguised their turkeys as 1) tom brady and 2) a leprechaun."

Even more adorable? Rebecca also posted a video of Shelby explaining her project on Barber's tweet. "She was so proud of it...and her teacher LOVED it!" Rebecca wrote. "She made this video for you as well. Shelby was excited that some of the kids knew who you were!"

Unfortunately for this mother-daughter duo, Season 5 of Fuller House will be its last on Netflix as a result of low viewership, according to Business Insider. However, if Shelby's amazing Kimmy Gibbler turkey has inspired you to give Fuller House another chance, Seasons 1-4 are ready and waiting. And Season 5 drops on Dec. 6 on Netflix.