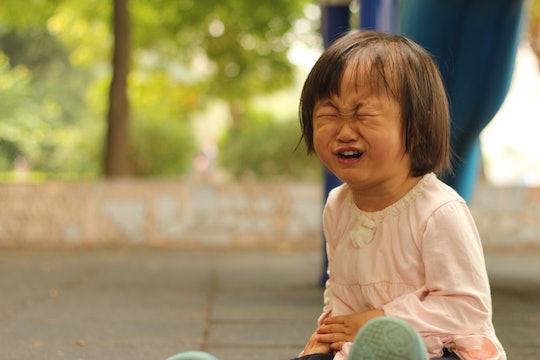 Study: When Girls Are In Pain, Adults Take Them Less Seriously Than Boys

No one likes to see kids in pain. Whether they scraped their knee, have a stomach ache, or bumped their head on a coffee table — it can be heartbreaking to watch. But would you react the same to a little girl hurting as a little boy? It turns out, girls' pain is taken less seriously than boys, according to a recent study, so the answer might be no, you might not react the same. Gender bias towards child pain response is so ingrained in modern culture that adults assume boys only react to when something really hurts, as opposed to girls who are more likely to overreact.

A team of psychologists at Yale University asked 264 adult participants to watch a video of a child — whose gender appeared ambiguous — getting their finger pricked. According to The Washington Post, half of the participants were told that the child shown in the video was named Samuel, while the others were told her name was Samantha.

They were then asked to rate the pain experienced by the child based on how much pain he or she displayed. The study, published in The Journal of Pediatric Psychology, stated that participants who believed the child to be a boy rated "his" pain as higher. The authors of the study concluded that "Explicit gender stereotypes — for example, that boys are more stoic or girls are more emotive — may bias adult assessment of children's pain," according to The Journal of Pediatric Psychology.

The new study adds to the previous findings of co-author Lindsey Cohen's 2014 study of the same premise. Participants in the original study also rated child's pain after watching a video, however the participants were primarily college aged females, according to The Swaddle. The Yale study aimed to broaden the findings with a participant group of adults ages 18 to 75 and balanced between gender.

The Yale study's lead author, Brian Earp, explained how gender-bias and implicit sexism come into play. It was as though the participants thought, "'For a boy to express that much pain, he must really be in pain,'" Earp said, according to CNN.

Another study, published in the journal Disease in Childhood, found that this sort of gender-based discrimination exists in pediatric health care as well. Girls around the globe have lower levels of immunization percentage, home food allocation, medical care for childhood ailments, and percentage of household health care expenditures allocated to them. This bias leads to poorer overall health of female children, and deliberate parental neglect of girls’ essential and life-saving medical care, the study said.

But sexism in relation to children doesn't stop at pain management and medical care. A 2017 study published in the journal Science found that sexist ideas are picked up by children, as The New York Times reported. Researchers looked at 400 children ages 5 to 7, and girls as young as 6 were found to believe that men are inherently smarter and more talented than women, according to The New York Times. These beliefs then make girls less motivated to pursue novel activities or ambitious careers, the research suggested.

Study co-author Andrei Cimpian, associate professor in the psychology department at New York University told the Times that girls are simply digesting the gender bias that surrounds them: "As a society, we associate a high level of intellectual ability with males more than females, and our research suggests that this association is picked up by children as young 6 and 7."

It's clear that wide and varied sexist undertones impact the ways in which adults view girls, as well as the ways in which girls view themselves. And these perceptions have lasting consequences. A report published in August of last year by the Becker Friedman Institute for Economics at the University of Chicago found that women who grew up in a state with more pronounced sexism go on to have lower wages and less labor force participation, according to CNBC.

Parents should be aware of the gender bias that their children come into contact on a daily basis. Little girls are impacted by the attitudes that people hold about them and the more that parents do to educate their children on why sexism is wrong, the less likely these attitudes are to be carried on into the next generation.