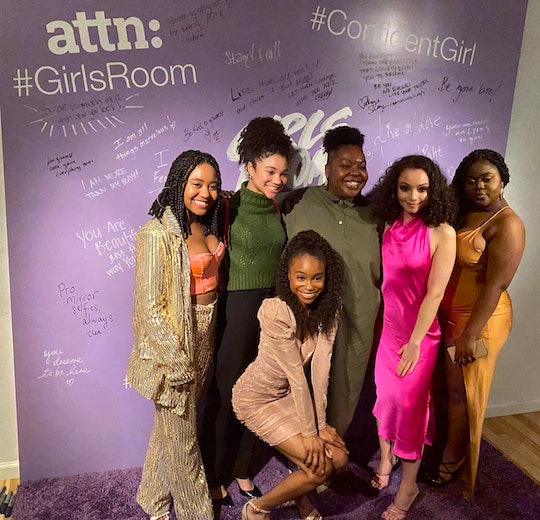 There wasn't much talk about body confidence and taking care of yourself when I was growing up. The lack of this conversation — this entire concept — in our lives had a long-lasting effect on me and my girlfriends. Now, shows like Girls Room by Lena Waithe and ATTN hope to inspire girls' confidence in new and relatable ways.

Last night I had the privilege to attend the premiere party of Girls Room, a new, scripted serial that is revolutionary in many ways. Developed by creative giants ATTN and Lena Waithe, in partnership with Dove, it is optimized-for-mobile and meeting teens where they are — on their phones. The show itself focuses on five girls who are simply living their lives. They are going to school, building relationships, and navigating the often fickle world of social media. However, unlike so many shows that pit girls in competition with one another to escalate the on-screen drama, these girls always have each other's backs. They are each other's keeper and they are also each other's hype team. It's a dynamic many of us are fortunate to find in adulthood, but seemed elusive to many of us as teens. Lena Waithe, Attn, and Dove, want to change that.

Directed by Tiffany Johnson, the cast is small, but mighty. Kylee Russell of Disney's Zombies plays Minnie, Anjelika Washington — who you'll recognize from Tall Girl — is Gloria, the talented Gi’onna Kamille is Carlotta, Kayla Maisonet of Disney's Stuck In The Middle is Thelma, and the effervescent Yindra Zayas is Melba. (Characters are all named for the Little Rock Nine — the group of nine Black students who were enrolled at the newly desegregated Little Rock Central High School in 1957.)

The show will be online-only through ATTN, and having watched all of the five short episodes yesterday, I can tell you that teens will love them. They are nothing like the PSAs or After School Specials we watched as kids. There's no creepy overtone, and the content never feels preachy. It feels like something these young women might have dealt with in their real lives, and it's simply transitioning those stories to the screen. For instance, the first episode deals with something many of us have to grapple with in our lives — jealousy. Melba takes note of all the attention that Minnie is getting, and she struggles with feelings of insecurity. She eventually begins copying Minnie's actions instead of finding her own path, and trouble ensues. But in the end, with the help of Minnie, she begins to understand that she is all she needs to be, and that's pretty profound — and exactly what Waithe intended.

At the panel after the screening, creator Lena Waithe tells the audience that she wants girls to know that "beauty is in the brain of the beholder," and that is something so many of us struggle with. She says that growing up she dressed like Da Brat, and wishes she could have told herself that if that's her style, that's OK. She knew she was different, and loved herself, but was unsure what her differences would mean for her going forward. She wants girls to know that there might not be a clear path, but that if they are true to who they are, they can be happy, confident, and successful.

Waithe also says that when it comes to casting, she knew she wanted a mix of girls, some more plus-sized, some on the other end of the spectrum, with all different personalities — because that's what real life is. "I'm a part of a girl's group myself, and there's different things we bring to the table, different personalities. We bicker like siblings, and make up like siblings," she says, and she wanted that dynamic represented.

Whether the girls on the show are talking about Instagram likes or breast implants, the content makes sense for the group and for the characters, and it's really enjoyable. The emphasis is about loving yourself in a way that embraces who you are on the inside, and not being afraid to show others that you love and care for them, even if that can be tough. The first episode is already available on the ATTN Instagram page, with new shows every Wednesday at 9 a.m.