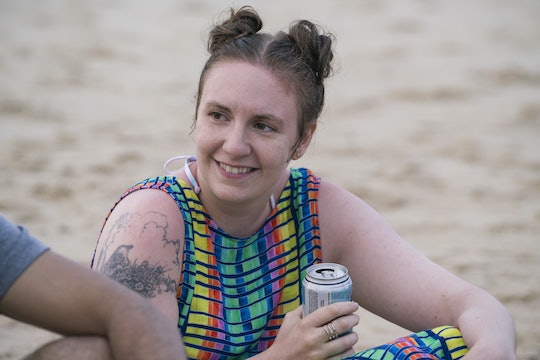 'Girls' Is Bringing Some Star Power To Season 6

Girls returns to HBO for its sixth and final season on Sunday, Feb. 12 and to reward us for our loyalty all these years, it's bringing back some of its most popular characters, as well as a flock of new, critically acclaimed darlings, for Girls Season 6 guest stars. As the show's executive producer, Jenni Konner, put it in an interview with Entertainment Weekly, "Everything that came before has been leading us to this point. I’ve always said Girls is about them trying to grow up, and this season is no exception." So we know that the four main characters' struggles to connect — both with each other and with others — will continue to be a theme in Season 6. Hopefully, this time, it's with a resolution.

Added Konner, "They’re always trying, but this season is — though they don’t know it — the last chance to figure out if they’re really going to stay friends." As much as Hannah, Marnie, Jessa, and Shoshanna rely on each other for growth, they also have a strong community of side characters to teach them valuable lessons on their journey and to help guide them back to what really matters to each of them. Here's who will be helping them out in the final season, proving this show is determined to go out with a bang.

Jon Glaser will return as Laird, Hannah's neighbor and the father of Adam's niece, Sample. When we last saw him, he was basically figuring out how to single parent, since Caroline, who had a history of mental illness, abandoned the family. (In real life, Gaby Hoffman was busy shooting her Emmy-nominated turn on Transparent.) While Glaser's return is confirmed, we don't yet know whether Hoffman made it back for Season 6.

Colin Quinn played Hermie, the owner of the chain of cafes at which Ray is a manager. He memorably left a new location to Ray to manage before he decided to run for city councilman, and later, he teamed up with Shoshanna to successfully revive his brand. It looks like he'll be on hand again for Season 6 to deliver grumpy-but-wise old man vibes.

Aidy Bryant played Abigail, Shoshanna's boss at her job in Tokyo. We first met her when she interviewed Shosh for the gig, and later when she fired her, shipping Shoshanna back to the states, much to her dismay. What her return means for Shosh's career in Season 6, we'll have to find out.

Corey Stoll is set to return as Dill Harcourt, the Anderson Cooper-inspired cable news anchor who had a brief fling with Elijah before they suffered a brutal breakup. Could they finally patch things up in Season 6?

Chelsea Peretti, of Brooklyn Nine-Nine fame, snagged a guest spot this season as the editor of a magazine Hannah pitches herself to. (Expertly, from the looks of the trailer: "I just feel like I’m a really perfect fit for your magazine. I don’t give a sh*t about anything, yet I simultaneously have opinions about everything.")

It looks like Lena Dunham revolted against the devastating Good Girls Revolt cancellation by poaching one of its stars, Joy Bryant, for a Girls guest spot. No details on her character are out just yet, but she thankfully lends some much needed black girl magic to the guest star list.

The most unexpected announcement among the Season 6 guest stars is definitely Matthew Rhys, who is best known for his Emmy-nominated role on FX's going-on-five-seasons period drama The Americans. He boasts a much scruffier look in sneak peeks of his Episode 3 debut, and promises the role is a "total departure" from his work on The Americans. (My money's on some sort of mentor, or possibly a psychotherapist, for Hannah.)

Riz Ahmed was everywhere in 2016 — from HBO's The Night Of, to Netflix's The OA, to Star Wars franchise hit Rogue One. But he'll return to HBO for a guest arc on Girls as a zen surf instructor who seems to spend a lot of time with Hannah in the season premiere, from what we can gather in production stills.

All told, it's an exciting group of actors to send off the show with, and I'd be willing to wager there are even more surprises in store still to come.