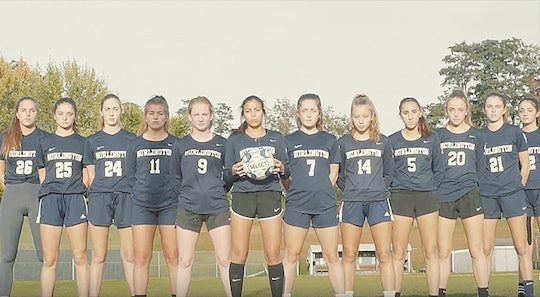 A group of female athletes are standing strong after receiving pushback for drawing awareness to an important issue. And as mind-boggling as it might seem to some, a few members of this girls soccer team were penalized for wearing equal pay shirts to a recent game. The good news? The young women have a ton of supporters in their corner and many agree with their inspiring message.

With just three minutes left in their Sept. 18 match, 17-year-old Burlington High School Seahorses captain Helen Worden scored a goal, putting her team ahead of the South Burlington Wolves, according to People. Needless to say, it was a huge moment. Fans cheered the team on as they ran towards the stands to bask in the glory of their score. And that's when it happened: Four members of the Seahorse team took off their jerseys to reveal t-shirts reading "#equal pay," in reference to the pay disparity that exists between female and male players in professional soccer, according to USA TODAY.

The move resulted in all four players being issued a yellow card by the referee because per Vermont's athletic rules, players are not allowed to wear clothing with slogans, according to The Burlington Free Press.

"The refs issued yellow cards to those four, at which point the crowd started to chant 'Equal pay! Equal pay!' just like in the Women's World Cup this summer," Lydia, a member on the team, told CNN about the moment, proving there are plenty of people who share their goal.

The U.S. Women's National Soccer Team first brought attention to the equal pay fight, aka gender wage gap in sports, after winning the World Cup in July 2019, according to Slate. And when the impressive team won their final game against the Netherlands, fans broke out in an equal pay chant.

The Seahorses might be a young team, but their work on this issue would impress any adult. As CBS News outlined, the ladies went as far to make the shirts with the help of Change the Story, a non-profit that "fast-tracks women's economic well-being in Vermont." And, according to Seahorse co-captain Maia Vota, you can get your own shirt for $25. If you're a man, however, you'll have to pay an additional 16% ($4), which represents the wage gap.

"So right now, in Vermont, the wage gap is $0.16, which means that women earn $0.84 to the dollar that the men do on average. We're working to close that so that when [high school] girls soccer players are out in the world working full-time, they will be making equal pay for equal work," Jessica Nordhaus, mom to player Lydia Sheesher and a member of Change the Story, said in a video about the partnership, according to Fox 8 Cleveland.

So far, the team's work has been met with an outpouring of support from the school and community at large. They've sold over 1,000 shirts as of Monday and even received a message of encouragement from Olympic champion and World Cup winner, Brandi Chastain. She wrote in a tweet, "Thank you @bhsgirlssoccer for standing up, celebrating and taking your jerseys off for #equalpay Proud of you! #rolemodels." Heck yeah!

So does politics have a place in high school sports? I guess it depends on who you ask. But it definitely seems like these girls have the right idea in drawing attention to and fighting for something incredibly important — equal pay.