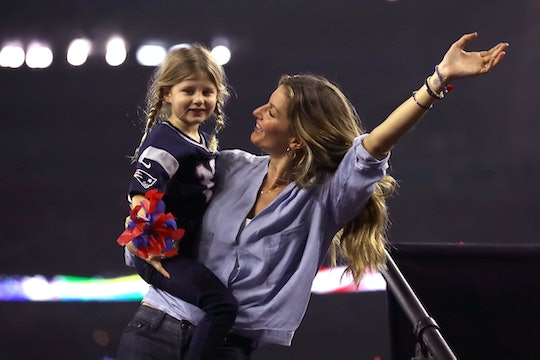 "One of the most special moments I've shared with my kids was while breastfeeding," the model and mother of two wrote on Instagram Friday. "That special look you get, that feeling of connection is unlike anything I have ever experienced."

Bündchen has two children with NFL quarterback Tom Brady, who US Weekly reported she married in February 2009 after roughly two years of dating. In December of that same year, the couple welcomed son Benjamin, now 9, into the world. Three years later, their now-6-year-old daughter Vivian Lake was born.

Bündchen went on to say that she felt "blessed" to have been able to nourish her children "in this way."

But this isn't the first time Bündchen has shared a photograph of herself breastfeeding. In December 2013, she shared a snap of herself getting fully pampered by her beauty team as she nursed a then-1-year-old Vivian. In the now infamous breastfeeding picture, Bündchen, dressed only in a white terry-cloth bathrobe, cradles Vivian in one arm while a manicurist, makeup artist, and hairstylist work around her.

What's more, this isn't the first time Bündchen has spoken publicly about her breastfeeding experience. In 2018, she told People that breastfeeding both of her children for more than 18 months each had ultimately changed the shape and size of her breasts.

"I was always praised for my body, and I felt like people had expectations from me that I couldn’t deliver," People reported Bündchen said. "I felt very vulnerable, because I can work out, I can eat healthy, but I can't change the fact that both of my kids enjoyed the left boob more than the right. All I wanted was for them to be even and for people to stop commenting on it." The supermodel went on to tell People that, as a result, she'd quietly gotten a breast augmentation in 2015, only to immediately regret the decision.

But while Bündchen has been outspoken about her belief in the benefits of breastfeeding, she congratulated all mothers, including those who do or did not breastfeed, in her post Friday. "Congratulations to all mamas out there for the effort that we put in, the ones who breastfeed, and those who could not and have had heartbreaking moments trying to," she wrote. "I celebrate all of you!"

More Like This
Can You Burp A Baby Too Hard? A Pediatrician Shares Tips For Gassy Tummies
Aww! 2-Year-Old Archie Is "Very Happy" To Be A Big Brother
'Harry & Meghan' Shares Never-Before-Seen Photos Of Archie & Lilibet
Celine Dion Shares She's Been Diagnosed With A Rare Neurological Disorder