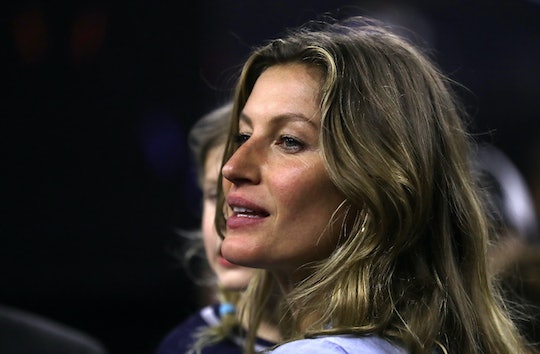 I know that at the Super Bowl we are all expected to be pounding beers and eating hot wings, but that's not how all of us roll. For a better example of how I like to enjoy my football, I would like to refer all of you to Gisele Bündchen calmly sipping wine in her VIP box. Honestly the tweets and memes of Gisele drinking wine at the Super bowl is something we can all identify with.

So there are very few times in my life that I feel I can truly identify with Gisele Bündchen. After all, she is a world famous super model, a media mogul, and a wildly successful business woman who happens to be married to a football legend. I, on the other hand, am a freelance blogger living in a tiny apartment and married to my cat. But at this moment, watching Bündchen calmly sipping a glass of red wine during the Super Bowl looking, well, a little bored, makes me feel that I am Bündchen. We are all Bündchen. If I ever run into Bündchen at like a Starbucks or something, I now feel like I have something to talk to her about. And clearly, I am not alone here.

For those of us who watch the Super Bowl more out of a sense of cultural obligation than an actual understanding of the game, or even real interest, it is moments like this that give the event meaning. I only have the vaguest idea of what a "run" or a "tight end" or a "first down run stop" means. But you better believe I understand sipping on a nice glass of red no matter what the venue is.

Of course, Bündchen's drink of choice was hardly the only reason people were tweeting about this icon at the Super Bowl. A lot of people were more than a little peeved that she kept being referred to as "Mrs. Tom Brady" as if she wasn't an icon in her own right.

Sure, I understand that Tom Brady is the quarterback of the New England Patriots so this is technically his event, but come on, it would be really nice if everyone acknowledged women's full names and their accomplishments when they were mentioned, you know? I mean, the tweets alone about Bündchen at the Super Bowl should be enough to prove that people care about Bündchen at least as much as they care about Brady.

In fact, after just about every major victory for the Patriots, the camera shot to Bündchen, looking like Cersei Lannister in her private box to watch her reaction. Quite honestly, it was really helpful for me, someone who knows nothing about football, to tell what was actually happening during the game. But of course, being married to a football star, Bündchen actually knows a thing or two about the game.

She's always there to support her husband when he's playing at the Super Bowl (which apparently is just about every year), and always looks incredible doing it. I'll be honest, I haven't managed to perfect the "model off duty" look as Vogue terms it, probably because I'm not a model. So while I definitely identify with Bündchen's alcohol choice and overall look at the Super Bowl, and as a woman I wish she got the credit she deserved at the event, let's be honest: Bündchen is not just like all of us.

That being said, if I ever got to go to the Super Bowl, I know who's box I'd want to hang out in.