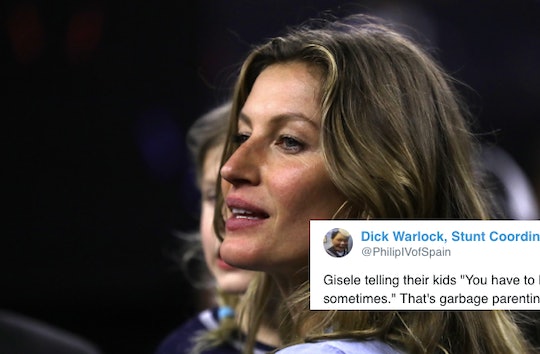 People Are Calling Gisele's Message About Losing To Her Kids "Garbage Parenting," & Here's Why

Ah, Gisele Bündchen. Supermodel, mother, clean-eating enthusiast, and supportive wife to her famous UGG-wearing, NFL quarterback husband. She's the kind of celeb who seems to live a life as luxurious and shiny as her oh-so-perfect hair, one in which she begins her day with yoga and meditation and chef-prepared organic raw food meals that wouldn't dare include things like dairy, sugar, iodized salt or nightshade vegetables (especially inflammation-causing tomatoes!). In Bündchen's version of motherhood, infant formula is basically poison, and dropping the baby weight is as natural as breathing. So it's really not entirely surprising that Gisele explained the Patriots' Super Bowl loss to her kids Sunday by telling them that, well, sometimes "you have to let someone else win."

To her credit, it must have been a hard night for the 37-year-old mom-of-two: according to USA Today, Gisele's 8-year-old son Benjamin, and 5-year-old daughter Vivian both cried after watching their dad, Tom Brady, and the rest of the New England Patriots lose to the Philadelphia Eagles 41-33. And her children's sadness — coupled with what was surely Brady's own deep disappointment — had to feel pretty crushing. But in an attempt to turn the team's defeat into a valuable lesson to her children about failure, sportsmanship, and the fact that winning isn't everything, she came up with an answer that was, well, just so Gisele.

After the game, USA Today said Bündchen "crouched down and wiped tears" from her children's eyes, and attempted to comfort them and Brady's 10-year-old son, John. Then, after Vivian asked her mom about how the Eagles had won, Bündchen said,

Just this time. Daddy won five times. They never won before. Their whole life, they never won a Super Bowl. You have to let someone else win sometimes ... We have to share. Sharing is caring.

Bündchen's message was clearly well-intentioned, and technically, it is important to let children know that sharing is important, and, uh, taking turns is good? But it didn't take long before social media began roasting her for the comment — specifically because instead of explaining that sometimes things just don't go the way you want them to, and that the other team won because they worked really hard and played a good game, she somehow made it seem like the Patriots lost because they decided it was only fair to give someone else a chance to win the coveted Vince Lombardi trophy.

Of course, it wasn't the first time that Bündchen had made a comment that made it clear she lives in a beautiful unicorn bubble of genetically (and financially) blessed humans far away from the rest of us mere mortals. In a 2010 interview with Harper's Bazaar, the then-30-year-old new mom criticized women who didn't breastfeed their babies, and said,

Some people here [in the United States] think they don’t have to breastfeed, and I think, ‘Are you going to give chemical food to your child, when they are so little?’ There should be a worldwide law, in my opinion, that mothers should breastfeed their babies for six months.

Then there was the time she took credit for her quick return to her pre-pregnancy weight after giving birth in an interview with Brazillian TV show, Fantastico, according to Babble:

I did kung fu up until two weeks before Benjamin was born, and yoga three days a week. I think a lot of people get pregnant and decide they can turn into garbage disposals. I was mindful about what I ate, and I gained only 30 pounds.

And then there was the time she seemed to throw shade at single mothers, when she told The New York Post:

My son is so beautiful, I love him so much. But before you have children, you have got to make sure you've got a great man. You can't settle for less ... someone you love, and someone who has the same beliefs.

(Need she be reminded that, according to Us Weekly, her husband's ex-girlfriend, Bridget Moynahan, was pregnant with John when they split in 2006?)

In Bündchen's defense, she did seem to back up her eye-roll-inducing words to her kids with a truly valuable action: according to USA Today, as she and her children left the stadium, she stopped to offer her congratulations to Eagles players, and gave the entire team a shout out on Instagram before praising the Patriots for giving their best during the game (now that's how you model a good attitude after losing!).

It's easy to be snarky about Bündchen — she's basically the Brazilian Gwyneth Paltrow, after all — and of course, much of it comes from the fact that she lives the kind of privileged life most of us can only imagine. But while she does seem to be a loving and devoted mom, I can't say that I'll be rushing to follow her parenting example anytime soon.