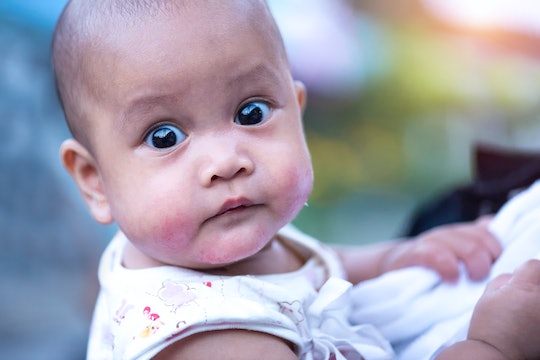 Giving Babies Antibiotics Raises Their Risk Of Eczema, But Here’s Why You Shouldn’t Freak

As if anyone needed one more thing to worry about, a new study shows that babies who take antibiotics are more likely to get eczema. Which sounds terrible, but it's not the end of the world and certainly doesn't mean that you shouldn't give your child medicine. Whatever illness an antibiotic is taking care of is probably way worse than a rash. But it is something to consider. The researchers analyzed studies sone between 1966 and 2015 and found that children who were given antibiotics more than once within the first two years of their life were more likely to develop the allergy.

The difference between patients who weren't given antibiotics and those who were are pretty striking. The risk of eczema increases from 15 to 41 percent if an infant took antibiotics. They also increase the risk of hay fever, which increases from 14 to 56 percent with antibiotics. Researchers think that the medicine affects the stomach, like impacting important microbes and that hurts the immune system. It's good to know that there's a connection, but the scientists haven't gone as far as recommending not giving antibiotics to infants. Sure, the rate of being prone to allergies is a pain but not so much of a pain that parents should be scared — what's a little hay fever if you're trying to knock out a virus or something?

Dr. Jonathan Spergel, Chief of the Allergy Section at the Perelman School of Medicine at the University of Pennsylvania told CBS that there's more research to be done, too, and that there are many possible factors to consider when giving kids antibiotics. Like anything else, it's all about balance. "It’s important to give vaccines and immunizations when we can. Similarly, when you have a significant bacterial infection, you have to treat it," he said.

The doctor added, "People die from meningitis and pneumonia. But you don’t want to give antibiotics when you have the common cold. Too many antibiotics definitely cause more diseases. Treat infections when they’re real infections and not when they’re not.”

Allergies are the worst, but eczema is totally treatable with over the counter creams and lotions, it's not the end of the world. It would be worse if your baby had strep throat or something and passed it all around their daycare. Parents should be wary of how their pediatricians are prescribing medicines for kids and it's always fair to ask questions, because no one wants itchy, dry skin. But in some cases, it might be a small price to pay for your family's health.