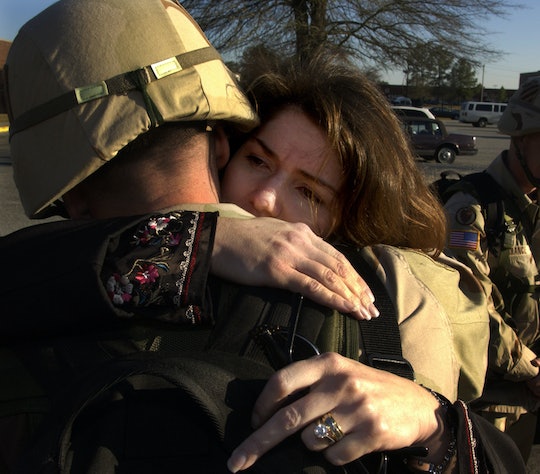 4 Military Moms On Giving Birth Away From Loved Ones

The COVID-19 pandemic has shifted everything for expectant parents, from who can be present at birth in the hospital to when you can safely have visitors in the days, weeks, and possibly even months after your baby comes home, where you are most certainly going to stay for now. Military moms — those in uniform, along with their spouses — know what it's like to give birth while isolated from loved ones.

Deployments and trainings change, military moms move frequently and often far away from relatives, and a baby won’t wait for matters of national security. Alison Buckholtz’s first son didn’t. He was born during the fall of Baghdad in April 2003. Buckholtz, whose naval officer husband was racing back on leave from a deployment to Iraq, was wheeled back into her hospital room in time to see Saddam Hussein’s statue being pulled down on TV. It is now part of her son’s origin story.

“We tell him the whole story of like, I was on bed rest, Dad was in the war, he was flying in a shock and awe campaign,” Buckholtz says. “I was crying every day because I didn't know what was gonna happen. You can weave all of those elements into a story once the story is over, right, and then it becomes part of your family history.”

In military lingo, moms like Buckholtz have developed SA (situational awareness) in all things that can go FUBAR (ahem) in seconds flat. Romper spoke with four moms who have become SMEs (subject matter experts) in handling the first few days and weeks postpartum without being surrounded by handfuls of doting loved ones.

“My first tip would be to not watch the news because I watched the news all the time when I was alone in bed waiting for my son to be born, and it was probably the worst choice I could have made,” says Buckholtz. “I was already so scared because it was my first child and my husband was away.”

“I would just tell people who are already experiencing a really hard situation to go as easy on themselves as possible in terms of how they spend their free time,” she advises. “If it’s just watching dumb TV, I would wholeheartedly advise them to do that. I think part of self-care is just keeping it light.”

“I’d suggest a lot of FaceTime and pictures sent via text to family who can’t be there in those first few weeks,” says Gahan, a journalist and Navy wife whose second child, now 1, was born while her family was stationed in Japan. “It’s the best of both worlds: they get to bond with the baby and see them in real-time but you don’t have to worry about someone overstaying their welcome.”

The family got a trial run of self-isolation before the current pandemic when her kids, including a nearly 3-year-old daughter, got ill and they had to quarantine for 10 days.

“My friends showed up at the door with meals and food,” Gahan says. “No contact made, but I felt just as grateful as if they had come inside to make the meal there.”

“I kept a daily journal,” says Weckerlein, who was stationed in Italy on active duty in the Air Force when her first child was born in 2003. It allowed her to “focus on the events of the day, to document my daughter's growth, and my own personal successes. Sometimes, a personal success was just taking a shower,” she recalls. “It allowed me to process how I was feeling, and now, it's a keepsake for my teenager.”

“I wanted desperately to share my baby with my parents and sisters, to allow them to experience how fantastic she was, even from afar,” says Weckerlein. “We painted her feet and made footprint cards to send to them. I saved all the emails they sent and put them in her scrapbook so she would know how they thought about her. I had my parents read books to her over the phone.” She also used tips and tricks from the book Moms Over Miles.

Wecklerlein now works for the Army as a civilian and has four children, all of whom were born while far from relatives. When she was pregnant with her last, in 2017, she created a hashtag so family could follow along.

Have someone in your corner who you can be 100% honest with, recommends Carlson, a mom of three boys ages 10, 6, and 4, each of whom were born while her husband was on active duty in the Marine Corps.

“Whether it be a friend or family member, whomever,” she says, you need someone that you can tell “exactly how you're feeling and what you're thinking and what's really going on without feeling guilty about burdening them or stressing them out.”

The baby won’t remember if the laundry piles up, she adds. Finally, if people ask for ways to help you, be ready to accept.

“Have some ideas in mind of what they may be able to do that will really help you," she says. "Whether that be the grocery delivery, gift certificate or gift card to be able to go to get carry-out from places nearby. Or, if it's like an IOU of ‘Hey, once this craziness goes away, I would really love to be able to go get my hair cut.’”