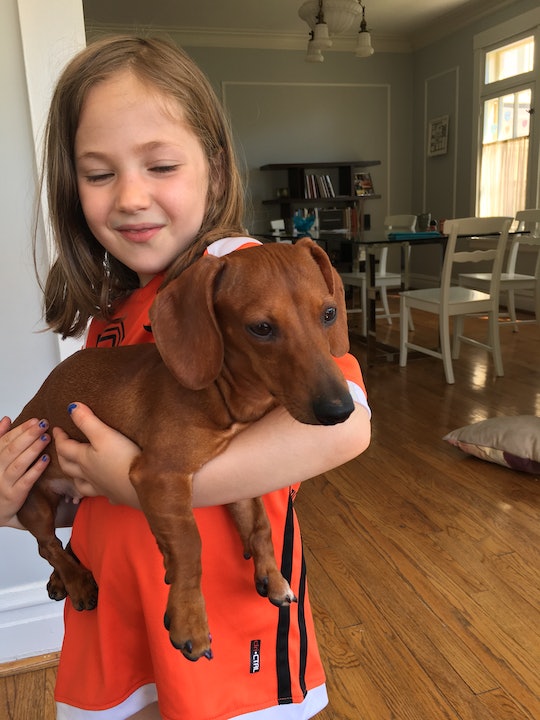 Giving Up A Dog Is Hard, But It Can Be For The Best

My kids and I are obsessed with dogs. Actually, “obsessed” would be an understatement. If we could turn our home into a pet shelter — except we’d get to keep all the dogs — we would. But our obsession has devastated our lives. It started out so innocently five years ago, when we adopted our first dog. At the time, we were overjoyed, full of excitement. Little did we know we would consider giving up a dog we had adopted in the future.

Lola didn’t have a name at the shelter, just a number. She was a stray between the ages of 3 and 6, and she came with cherry eye (an easy-to-fix eye issue), two ear infections, and a an incredibly nervous yet loving temperament. We were hooked.

Lola was what you might describe as a “starter dog.” She came to us already house trained, she got along perfectly with our two cats, she never complained about anything and she didn’t cause any issues. Essentially, she was happy to see us and was (and still is) the perfect dog.

I forked over Betty Boop’s $100 adoption fee, and grabbed that little bundle.

Enter Betty Boop. I was browsing on Petfinder, as I do daily (or, to be honest, hourly), and I came across the sweetest little pup. Just 7 pounds, Betty Boop was a mini-dachshund who would not do well in a home with kids, dogs or noise. Eh. My Lola is good for everyone, my kids act like mini-adults (who have temper tantrums, but whatev) and I was sure that little Betty would learn to love the sounds emitting from my husband’s practice sessions (he’s a professional drummer).

I forked over Betty Boop’s $100 adoption fee, and grabbed that little bundle. I was rewarded by a dozen licks all over my face. But I only had an hour to enjoy her.

Contrary to the shelter’s belief, she got along with Lola (they ignored each other). But she did not like my children, though my kids were being quiet, calm and their best selves. It took about two hours for me to get Betty Boop to approach them without trying to bite them. And even after she learned that they were safe, she forgot a half hour later, and we had to start the process over again.

The worst part came when I tried to take Betty Boop to my daughter’s soccer game that afternoon. Let’s just say she tried to eat all the kids — and the parents weren’t pleased.

Was this the right home for Betty Boop? I felt terrible. She’d do amazing with a single adult (she was also jealous of my husband, whom she attacked multiple times, and who had to live in the basement during her stay).

I adopted her for life, and truly this was my fault. Still, if she was so scared that she felt like she had to bite everyone she met, then she deserved better. Back to the foster home she went.

I wasn’t deterred however, though I knew now to really pay attention to the shelter’s descriptions of their pups.

That’s how I found Queen Elizabeth. She got along with kids, dogs and cats. She was an English Bulldog, and I had to have her. This time, I dragged my entire family an hour away to meet Queen, and we agreed that she was perfect.

Until I brought her home.

She preferred to be the first one to eat, the first one to go outside and the only dog to accompany me on my bed. I felt bad for Lola, but my first dog, who is as good natured as they come, seemed to understand and didn’t mind. What she did mind, however, was the biting. Queen bit her. It started out being a once-in-a-while thing if Lola was in her way or was lying somewhere desirable. It progressed into a multiple-time-a-day thing, where I was breaking up fights with the dogs more often than I was breaking up fights with the kids.

After six months of trying everything to get them to stop, it was time to return Queen Elizabeth, too. We were crushed. She was so sweet to everyone except Lola.

We cried for days, until we saw she had been adopted by a new family who dressed her in a Santa hat and had a warm scarf wrapped around her chubby neck.

Sometimes, returning dogs is for the best, though it feels like the worst thing ever. We knew Queen Elizabeth would be happy in a home where she was spoiled as much as she deserved to be. She is a queen, after all.

More Like This
Moms, Just Eat The Fruit Dammit
Real Parents Share What Time They Let Their Kids Rip Into Gifts On Christmas Morning
Festive Mommy & Me Holiday Nail Ideas To Try
If Your Kids Love Their Elf, You Don't *Have* To Put Him Away On Christmas