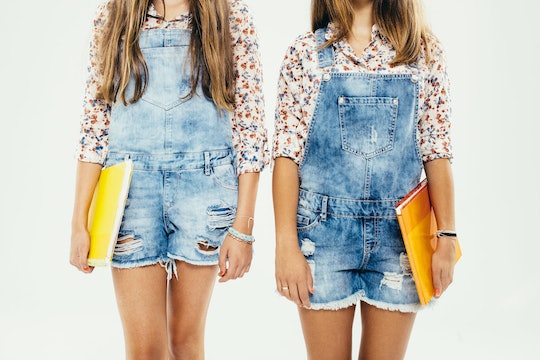 Among the myriad mistakes I made growing up was my back-to-school outfit in seventh grade. This was the ‘80s, mind you. I’d splurged at my local Caldor, a discount chain, on what I felt sure was a sharp new look: high-waisted Lee jeans, a plaid button-down with an oddly Victorian neckline, ruffles practically to my chin, and a wide-wale corduroy blazer with patches at the elbow.

As I dressed for the day, I felt fluttery with excitement.

The first day of school is always a reset button, the ultimate do-over. And I — a socially awkward, retainer-wearing mess of a kid who stood a full head taller than most of my peers — desperately wanted that do-over. I imagined the day unfolding like some sort of before-versus after makeover story: I’d glide down the hallway in my new clothes as classmates stepped aside in wonder. “Why, look at Ali,” they’d murmur. “She’s so… put together. And those ruffles!” Just like that, my social fortunes would change. I’d be popular, beloved, admired… the new queen bee.

That isn’t, of course, how it went down.

If anyone noticed or cared what I happened to be wearing, they didn’t mention it. Meanwhile, those Victorian ruffles grew tighter, itchier, against my neck with each passing minute. And the day was unseasonably warm — far too hot for those wintery layers. All day, sweat trickled down my skin. By the time I stepped off the afternoon bus, I was damp as a rainforest, with a neck full of scratch marks… and otherwise the same person I’d always been.

This could have been an early lesson about the futility of putting too much stock in shallow things or in other people’s opinions. But I wasn’t exactly a fast learner. My diary from that year reveals page after page of a depressing truth; increasingly, the only thing that mattered to me was what other people thought about me. I had exactly zero sense of my own intrinsic worth.

Not surprisingly, I was miserable.

Today, I’ve got considerably more decades under my belt, and hopefully a little more wisdom (although not necessarily a better sense of style). I’m a mom and a children’s book author, and my head is filled with kids both real and imagined. Still, I often find myself thinking about that 12-year-old in ruffles — about the way I handed over all of my power to everyone but me. I think, too, about all of the ways the world has changed since then. Without a doubt, every insecurity I had would have been amplified exponentially by things that have since become routine — like reality television and social media, that 24-hour feedback loop of likes and dislikes.

The truth is, I’m still learning to know and value myself, to figure out my place.

My most recent children’s book, The Next Great Paulie Fink, explores some of these themes. Caitlyn Breen has just moved against her will to a small town in the middle of nowhere. It’s the first day of seventh grade, and Caitlyn is — just as I once was — desperate to impress her new peers, to find the “right” place in the social hierarchy. But Caitlyn’s new school is different than anything she’s known. Classes are held in a falling-down mansion with a haunted-house vibe. She’s expected to take care of both goats and a shy kindergartener. There are just 10 other kids in the entire grade, and wow: they are quirky. Worst of all, these new classmates only want to talk about some kid named Paulie Fink, a class clown who for some reason hasn’t returned to school.

The class decides to hold a reality-TV-style competition to find their Next Great Paulie Fink… and they put Caitlyn in charge. The competition, for Caitlyn, becomes a crash-course in becoming her best self. As she learns to navigate the ups and downs of being in charge — experiences that include spontaneous dance parties, runaway goats, a Shakespeare-themed food fight, and a high-stakes soccer game that gets very, very weird — she begins to discover her own voice. Her own self-worth.

Not coincidentally, she begins to have a whole lot more fun.

Middle-school insecurities give way to high school ones, then these, in turn, yield to worries about colleges, relationships, jobs, and parenthood.

I gave to Caitlyn, in other words, what I hadn’t been able to give my own 12-year-old self: A second chance, a genuine reset, the kind of do-over that isn’t about how you look, what you’re wearing, or what other people think of you, but rather is about becoming the best, strongest, most empowered version of yourself.

The process is never over. Middle-school insecurities give way to high school ones, then these, in turn, yield to worries about colleges, relationships, jobs, and parenthood. The truth is, I’m still learning to know and value myself, to figure out my place.

So as the blaze of summer gives way to cool nights — as brand-new notebooks are stuffed into empty backpacks — I invite you to join me in the age-old practice of beginning again. Let’s do what children everywhere are doing now: resolving to make this the best year yet. And then let’s show them how it’s done — not with instant makeovers, new outfits, or other people’s approval, but instead with a steady, thoughtful commitment to becoming just a little bit better than we’d been before. That’s the ultimate do-over… no ruffles required.

Ali Benjamin's most recent novel is The Next Great Paulie Fink.