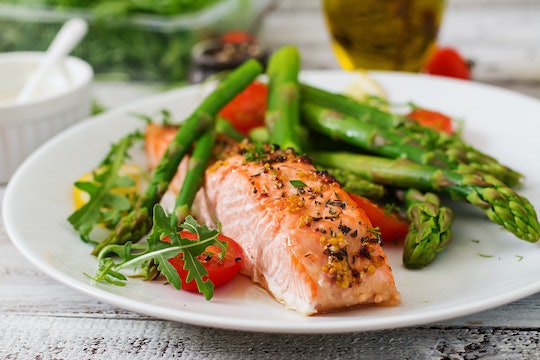 What if there was a magic elixir that would improve key aspects of your child's life and well-being? Well, it turns out there might be — and it's just a trip to the grocery store away. According to a new study from the University of Pennsylvania, giving your kid fish at least once a week could help them to sleep much better and boost their IQs. So, bring on the shrimp scampi and salmon patties for dinner, because this is a serious win-win. Seriously, after learning about the promising results of this study, parents far and wide are going to be learning some kid-friendly fish recipes ASAP.

For all its potentially life-changing (or at least diet-altering) implications, the research published this week in the nature journal Science Reports is pretty straightforward. By asking a group of 541 kids between the ages of 9 to 11 year olds in China about their fish-eating habits, the research team determined that those who reported eating fish at least once a week tended to experience fewer sleep disturbances, which is indicative of higher-quality snoozes. Perhaps even more strikingly, they also scored an average of 4.8 points higher on a standardized Chinese intelligence test that measures both verbal and nonverbal skills than the kids who ate fish rarely or never.

The researchers learned about the kids' sleep habits by having their parents fill out questionnaires that asked about how long the children generally slept, how often they woke up during the night, and how often they were sleepy during the day, according to a press release.

Because of the young ages of the study participants, however, the researchers opted to to ask them specifically which types of fish they ate. But they know that the driving force behind the apparent positive sleep and cognitive effects of consuming fish is omega-3 fatty acids. In fact, previous research has shown, separately, a link between omega-3s and sleep and omega-3 and intelligence. This new research of from the University of Pennsylvania is the first to identify a link among all three for example, although they could not definitively prove the connections because the study was observational.

Still, according to Science Daily, the research team — which includes Jianghong Liu, Jennifer Pinto-Martin and Alexandra Hanlon of the School of Nursing and Penn Integrates Knowledge Professor Adrian Raine — believe that improved sleep could be the missing link between fish consumption and increased intelligence.

Of course, it's hardly news that there are some real advantages associated with eating fish. According to Healthline, eating such seafood can help to combat depression, reduce a person's risk of autoimmune diseases such as Type 1 Diabetes, help to prevent asthma in kids, and more. But Samantha Heller, a senior clinical nutritionist at New York University Medical Center in New York City who was not involved in the study, told HealthDay that it's important for parents to keep its findings in perspective when they're planning out meals for the week:

It's not that eating fish is unhealthy per se, but there are issues that need to be considered before parents go overboard feeding fish to their kids to make them smarter and sleep better. ... The concern with eating fish is not only the overfishing of our seas, but the amount of mercury — a neurotoxin — found in fish. ... A healthy, balanced diet, plenty of exercise and limited computer and screen time can all help kids sleep better and do better in school.

Of course, parents will have to make the decision of whether eating more fish is the right call for their individual families — but this evidence suggests that it very well could be a good move.