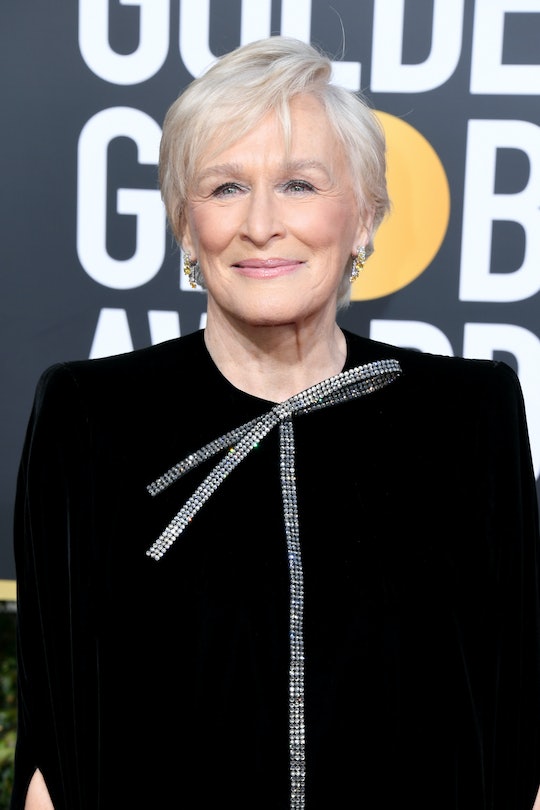 Actress Glenn Close may not have expected to take the Golden Globe Best Actress In A Motion Picture, Drama for her role in The Wife, as she did Sunday night, but once she made it on stage she definitely left a lasting impression — and one which went far beyond her acting prowess. That's because Glenn Close's speech at the Golden Globes turned out to be a powerful message for women about the importance of putting themselves first, and it was something everyone deserves to hear.

To be honest, pretty much everything about Close's win was a highlight, starting with the fact that she seemed to be completely shocked to hear her own name called. Though the win certainly wasn't her first, it seems that she'd been expecting one of the other women in her category to take home the trophy, and when she made her way to the stage, Close was already visibly emotional. At the mic, the 71-year-old took a moment to thank her "category sisters" Lady Gaga, Nicole Kidman, Melissa McCarthy, and Rosamund Pike, telling them she thought they "should be up [on stage] together, and then adding, "Oh my God, I just can't believe it."

As touching a moment as that was, it was clear that Close was really just getting started. The veteran actress told the crowd that, actually, the film she starred in had been a long time in the making, according to The Hollywood Reporter, and joked, "It was called The Wife. I think that's why it took 14 years to get made."

But Close — who plays an aspiring writer in the film whose work is overshadowed by her husband's own writing career — then shared some extremely moving wisdom with the crowd. As Entertainment Weekly reports:

I’m thinking of my mom, who really sublimated herself to my father her whole life, and in her eighties she said to me, 'I feel I haven’t accomplished anything,' and it was so not right.

I feel what I’ve learned form this whole experience is that women, we're nurturers and that's what's expected of us. We have our children and we have our husbands if we're lucky enough, and our partners, whoever. But we have to find personal fulfillment. We have to follow our dreams. We have to say, 'I can do that,' and 'I should be allowed to do that.'

The crowd promptly rose to their feet, giving Close a well-deserved standing ovation, and it marked what may have easily been the best acceptance speech of the night. And though it may have been a bit of an upset that Lady Gaga didn't get to take home the award as many seemed to have hoped, Close definitely made up for it by reminding women everywhere that they don't at all have to give up on their dreams, or be pigeon-holed by others' expectations that they sit back and care for everyone else.

As role models go, well, Close is a pretty good one. She closed her speech by reflecting on her nearly 45-year career in film, noting that she always "felt destined to be an actress," and said that now, all these years later, she "cannot imagine a more wonderful life."

So while Close may not have been the one favored to win the category (it even came as a surprise to herself!), the fact that she did gave viewers a valuable reminder that they don't ever have to be saddled with others' expectations. And that's a message that's *always* worth hearing.