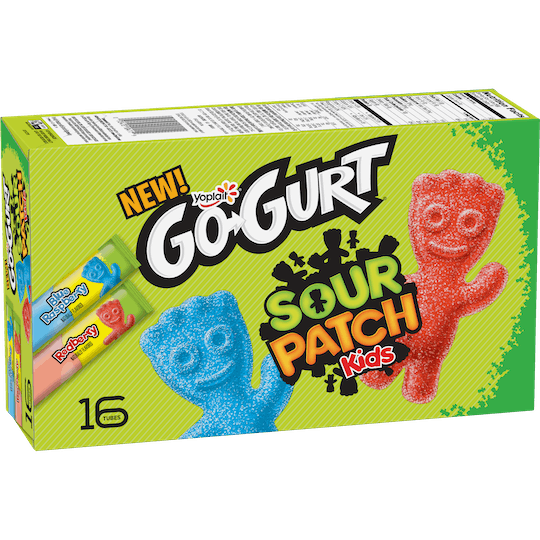 While Go-Gurt wasn't around when we millennials were growing up, Sour Patch Kids certainly were and they were at least top five in the list of best movie theater candies. And thanks to the new flavor collaboration from Go-Gurt, you're about to be able to give your kids the Sour Patch Kids dream experience in their lunchbox, just know you'll probably need to pick up an extra box because Go-Gurt just launched new Sour Patch Kids flavors and might find yourself sneaking in a few when the kids aren't looking.

Yoplait just released their two Sour Patch Kids Go-Gurt flavors, Redberry and Blue Raspberry, two of the most popular Sour Patch Kids flavors. This is the company's first flavor collaboration with a brand, and they've really gone for it with a candy that packs such a punch as Sour Patch Kids. The sour-then-sweet yogurts have already hit major grocery stores and are available in packs of eight or sixteen.

Whether you're a sour candy fiend or not, you can probably picture that unique sour moment when you bite into a Sour Patch Kid candy. Mental Floss explains how that very particular sour flavor comes to be, "Sour Patch Kids contain tartaric and citric acids, which are chock full of protons that our tongues register as sour. The protons actually increase when the acids are mixed with a liquid like saliva." Those ingredients are combined in a sugar-coating on the popular candy, and in Sour Patch Kids Extreme, the addition of lactic acid to the mixture makes the candy even more aggressively sour.

A sour yogurt can't rely on a sugar coating, but the Sour Patch Kids Go-Gurt flavors take a page from the same scientific book, using similar ingredients to achieve a sweet and sour flavored candy. A representative from the company explained how they were able recreate the taste: "The flavored yogurt has a combination of citric acid and malic acid which are naturally occurring in fruit at a very low level."

While Sour Patch Kids certainly aren't sugar-free, relying on that crystalized sugar coating to help bring the sweet and flavor, the Go-Gurt Sour Patch Kids flavors are non-fat and free from high fructose corn syrup, just like the rest of the Go-Gurt line-up. And like the existing Go-Gurts, the new yogurt flavors can be added to a lunchbox frozen and will be thawed and ready to enjoy by lunchtime. At the very least, they could give your kiddo quite a sour surprise when she opens her lunch box!

Fun fact: Sour Patch Kids candies were first made only in Canada in the 1970's, they were the shape of martians, reportedly to capitalize on the popularity of UFOs in that era, according to OldTimeCandy.com. The sour candies even went by a different, space age name, Mars Men, until the mid-'80s, when the shape changed as well, this time to a childlike figure reminiscent of the then-popular Cabbage Patch Dolls.

Another very little known but endearing fact about the candy brand? Mentalfloss reported that they're known to support indie music bands by letting them stay in leased homes that the company owns in Austin and Brooklyn, so long as the bands mention the candy on their social media channels. Surprising, indeed, but also successful. Due in part to their dynamic social media tactics, the company has seen increased sales in recent years.

Yoplait's Go-Gurt and Sour Patch Kids are both dominating their respective markets. Both companies are hoping the unexpected combination will be equally popular. For now, at least, they're bound to have the sweet-and-sour-yogurt market cornered. And your kid will earn some serious lunchtime-cred if they show up with it in their lunchbox.

More Like This
Moms, Just Eat The Fruit Dammit
10 Thanksgiving Desserts That Aren’t Pumpkin Pie
20 Holiday Gifts For Neighbors They’re Sure To Love
My Parents Never Taught Me To Cook So I'd Always Need Them