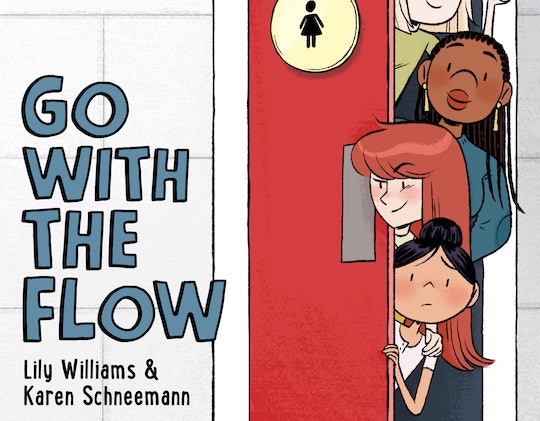 When I was a teenager, the idea of having your period was something only discussed between close friends and sisters, and only in hushed tones where no one would overhear. There was a lot of shame associated with what is a normal bodily function that happens in a huge part of the human population. I can't imagine growing up in a world where I didn't feel embarrassed about my period. A world where it's just everyday life, and where we speak with each other candidly about it. That's the world of Go With The Flow, a new graphic novel for young women that teaches them that periods are normal, and that girls deserve reproductive equity.

Authors Lily Williams and Karen Schneemann began working on this novel after the success of their webcomic, The Mean Magenta. Both focus on casual, frank, and humorous conversations surrounding menstruation and its effects. Go With The Flow follows four best friends through the trials and tribulations of friendship, fights, and periods. They join together and voice the need for the school to provide pads and tampons when they learn that the school is out, and no school in the district plans on restocking. When the school refuses, they take action, getting loud, and maybe going a bit too far in their efforts as teens are prone to doing.

The cover alone says it all — diverse, feminist, and full of relatable characters for every girl reading. But it's also bright, full of expression and emotion, and gives a vibe every girl knows — the bathroom can feel a bit like a prison when it comes to having your period. Early reviews are promising, too. Alexandra on Goodreads wrote "Got to read an early edition of GO WITH THE FLOW and all I can say is it is fantastic. I wish it was a book I'd had growing up and the friendships in this one are some of the best I've seen in YA. Feminists, LGBTQ community, diversity advocates - put this on your radar for Winter 2020."

There was nothing like this when I was growing up. We had Free To Be You And Me, a single scene in Clueless, and that was about it. Sure, it's fun to say "I was surfin' the crimson wave and had to haul a*s to the ladies," but that wasn't about the normalization of menstruation. It was about making Mr. Hall uncomfortable enough to dismiss a tardy. Effective, but it didn't really serve to move the dialogue forward in any meaningful matter.

Having had the good fortune to read an advanced copy of Go With The Flow, I will tell you that it is astonishing. Go With The Flow is an exceptional example of the genre, and its power is in its frank way of being relatable to a difficult subject. It speaks to the nature of gender dynamics and institutional misogyny in an approachable manner that will help teens discuss their period and their rights openly and honestly, and understand that they can demand better from those in authority. The artwork is dynamic and bold, and the use of color gives the entire work a sense of depth that is unexpected.

The original webcomic, The Mean Magenta, made jokes about getting your period. It busted taboos and laughed at some of the cringier aspects of menstruation, like period panties and chocolate cravings. It also shines a light on how we've spoken about periods up until now. At one point in the comic, a woman opens her bag to pay at the checkout line, and her tampons and pads fall out. She looks mortified. We've all been there. Yet, so few of us have asked why we should be embarrassed. Millions of people get their period each day, and yet we still model embarrassment for our kids? That's ridiculous.

Hopefully, Go With The Flow will serve to move that conversational marker forward when it releases in 2020, because even though we have certainly come a long way from hiding in the bathrooms to talk about it, we are nowhere near where we need to be on this issue. Our children deserve better.

More Like This
From Captions To Gifts, These Are All The Kindergarten Graduation Ideas You Need
34 Instagram Captions Perfect For Preschool Graduation Photos
There's Now A Barbie Doll With Behind-The-Ear Hearing Aids For The First Time Ever
I’m No Singer, But My Children Think I Am