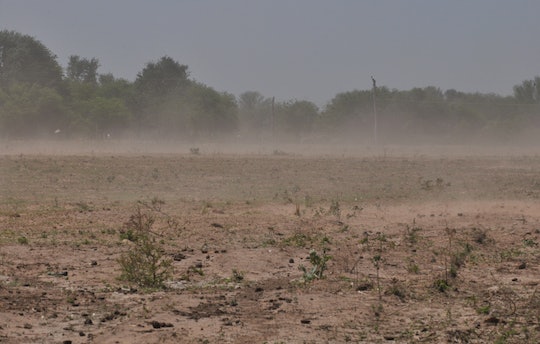 Don't Forget Your Mask: An Enormous "Godzilla" Dust Cloud Is Moving Towards The U.S.

Folks in Texas, Louisiana, Florida, Alabama, and other areas in the southeastern region of the United States may be noticing the effects of a "Godzilla"-sized dust cloud that's made its way from the Sahara Desert over the next few days. While the dust is expected to bring photo-worthy, vibrant sunrises and sunsets and hazy skies in some areas, health experts are concerned that the massive plume could aggravate respiratory health issues amid the ongoing COVID-19 pandemic.

The immense plume of dust, an annual occurrence that originated in western Africa last week and is significantly bigger this year, recently reached the southeastern region of the United States. After traveling roughly 5,000 miles across the Atlantic Ocean, the dust arrived in Florida on Thursday morning. It's projected to reach the Gulf of Mexico first before making its way to Texas and other states in southeast in the following days.

So why are health experts concerned? According to The Weather Channel, the dust plume could lower the air quality, cause air pollution, and trigger or worsen some allergies. And because "air pollution aggravates COVID-19 symptoms," like a dry cough and sore throat, Yale Climate Connections reported that hospital admissions are could increase "in regions where dust concentrations spike."

When the plume reached the Caribbean earlier this week, the air quality fell to "hazardous levels," the Associated Press reported. "This is the most significant event in the past 50 years," Pablo Méndez Lázaro, an environmental health specialist with the University of Puerto Rico, told the AP. "Conditions are dangerous in many Caribbean islands."

Dr. Sandro Galea, dean of the Boston University School of Public Health, told The New York Times that the dust plume, which has been given the the nickname "Godzilla" due to its enormous size, can "be an allergen that is uncomfortable with asthma or reactive airways."

As such, some people might experience symptoms such as a runny nose, scratchy throat, sneezing, and congestion, according to Dallas ENT. AccuWeather hurricane expert Dan Kottlowski told USA Today that "people with respiratory issues should not spend any long periods of time outdoors" in areas that could see effects of the dust plume because air quality could drop. "Some people with severe respiratory conditions may just want to stay indoors," Kottlowski said.

How can you protect yourself from the dust plume? By wearing masks, using air filters, and avoiding outdoor activities. But since the Centers for Disease Control and Prevention has advised people to wear masks in public spaces to help prevent the spread of the coronavirus, this should already be part of people's daily routines when they leave the house.