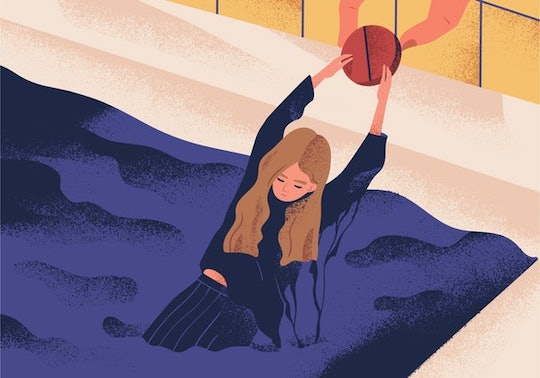 Going Off Antidepressants During Pregnancy Is Risky — I'd Know

When I found out I was pregnant, I quit my antidepressants.

Since I’d started trying to conceive several months earlier, I’d been on a lower-than-usual dose of medication. I’d successfully managed my major depressive disorder with antidepressants and therapy for years, but I thought that going off Zoloft was the right choice for me. I believed this even though I’d just learned that children of mothers with untreated depression during pregnancy could be at greater risk for everything from irregular fetal heart rate to — gulp — increased criminality in later years, per a 2017 Neuroscience review.

But I had also discovered that selective serotonin reuptake inhibitors (SSRIs, a commonly prescribed class of antidepressant) might up the odds of various health problems, including pre-term birth and autism spectrum disorders in offspring, as a different paper in Reproductive Toxicity warned. I figured most depressed women had survived pregnancy for several hundred thousand years without SSRIs like Zoloft, so, despite my doctors’ advice, I quit taking my antidepressant once I saw those two pink lines.

My mood plummeted shortly thereafter, and I could not convince myself that I would ever feel better. This was an exhausting, but familiar sensation. What was new was the anxiety, which was unexpected and all-consuming. Suddenly, the fact that I was pregnant was terrifying: What if there was something wrong with the baby? What if quickly mutated into It’s true that, and before long I was a pregnant, nervous wreck.

I knew my obsessive fears about my little bundle of cells were irrational, but no reasonable argument or reassuring prenatal checkup could convince me otherwise. (Spoiler alert: my almost-4-year-old is healthy, but I have yet to attempt another pregnancy.)

Depression Is A Common Condition

Depression during pregnancy affects an estimated 15-20 percent of women, some of whom have never had depression before, says reproductive psychiatrist Dr. Catherine Birndorf, M.D.. She’s the co-founder and medical director of The Motherhood Center of New York, and associate professor of psychiatry and obstetrics and gynecology at New York-Presbyterian Hospital Weill Cornell Medical Center.

The debilitating dread and worry I experienced is also not unusual. “Perinatal [occurring during pregnancy or within the first year of birth] depression tends to be a more anxious depression,” Dr. Birndorf explains.

A lot of women with perinatal mood and anxiety disorders don’t receive treatment; Dr. Birndorf estimates that about half of the women diagnosed with postpartum depression probably started getting depressed during pregnancy. She adds, “And then there are women who were struggling before they even got pregnant. Many women are so used to living with depression and anxiety that they don’t recognize it until someone, such as a health provider at a postpartum visit, asks them about it.”

Psychotherapy is recommended for patients with mild-to-moderate perinatal mood and anxiety disorders, but about eight percent of U.S. women have taken antidepressants sometime during pregnancy, according to Dr. Judy Greene, M.D.. Dr. Greene is a board-certified psychiatrist on the clinical faculty at New York University School of Medicine, and the former director of Bellevue Hospital’s Women’s Mental Health Program. (Disclosure: I met with Dr. Greene before and during my pregnancy.)

As awareness of perinatal mood and anxiety disorders has climbed, so has the use of antidepressants during pregnancy. Dr. Greene also credits the 2009 release of the American College of Obstetricians and Gynecologists (ACOG)’s depression treatment guidelines, which urge doctors to let patients make the decision. Before that, “Many of my patients were telling me that their OB-GYN had recommended going off medications,” Dr. Greene recalls. “I don’t hear that as much anymore. I think, now, OB-GYNS are saying, ‘Happy mom, happy baby.’”

This attitude was very helpful to Kathy Radigan of East Northport, N.Y. The mom of three (and Romper contributor) was prescribed Effexor for postpartum depression after her second child, now 17, was born. “Within a few days, I felt better, and within two weeks, it had completely lifted. But it also helped with my anxiety. I felt great.”

She was still on Effexor when she found out she was pregnant again three years later. “My OB-GYNs had no issue with me being on the medication. They were totally supportive and reassuring — they knew the Effexor was helping me,” she says.

Her doctors’ only concern was that Effexor can cause high blood pressure, which usually resolves when the dose is lowered.

I was told by multiple health-care providers that the risk of depression was greater than the risk of Zoloft.

Rhiannon Giles, of Durham, N.C., was diagnosed with OCD/anxiety and depression after her first child was born, though she says both conditions predate her oldest’s birth. “Both therapy and Zoloft were extremely helpful during my second pregnancy,” she says. Her doctors agreed: “I was told by multiple health-care providers that the risk of depression was greater than the risk of Zoloft.”

While her 4-year-old son was born two months early (he is fine now), Giles doesn’t think this is related to her antidepressant use. “My psychiatrist said she has seen hundreds of clients who were on Zoloft during pregnancy, and none of them ever had any issues.”

What About Those Worrying Studies?

While research may link antidepressant use in pregnant women to health problems in their children, the findings can be difficult to interpret. For instance, Dr. Greene points out that the increased risk of pre-term births could be linked to the use of antidepressants, or to the depression itself. (Also, she says, “The observed effects were small,” with an estimated three-day shorter gestation for babies exposed to antidepressants during pregnancy.)

And while untreated depression during pregnancy could play a role in offspring’s poorer outcomes, so could other factors that often go hand-in-hand with perinatal depression, like self-medicating with other substances, preeclampsia (which can be associated with postpartum depression), and less compliance with prenatal care. So as for the whole criminality-stemming-from-untreated-depression-in-utero thing, “I’d take that with a grain of salt,” Dr. Greene says. (Phew.)

Still, “Untreated depression during pregnancy can potentially negatively impact the developing fetus, the mother’s ability to bond and attach to the baby, and her relationships with her older children and partner.”

Although recent studies show autism spectrum disorder is not linked to SSRI exposure during pregnancy, “having depression or anxiety may increase one’s risk of having a child with autism or autism spectrum disorder by a small percentage.” Dr. Greene explains, “But it’s not the treatment, it’s likely genetic factors and other prenatal exposures,” such as maternal smoking during pregnancy, maternal infections, and inflammation.

“There’s really no right or wrong way to proceed,” Dr. Greene concludes. “Medications aren’t the only effective treatment for depression and or anxiety, I also recommend cognitive behavioral therapy,” as well as lifestyle modifications like optimizing sleep hygiene and de-stressing. But, “at the end of day, for moderate-to-severe depression or anxiety, I think medication during pregnancy is indicated.”

If you or someone you know is experiencing depression or anxiety during pregnancy, or in the postpartum period, contact the Postpartum Health Alliance warmline at (888) 724-7240, or Postpartum Support International at (800) 944-4773. If you are thinking of harming yourself or your baby, get help right away by calling the National Suicide Prevention Lifeline at 1-800-273-8255, or dialing 911. For more resources, you can visit Postpartum Support International. You can find additional resources at The Motherhood Center of NYC.