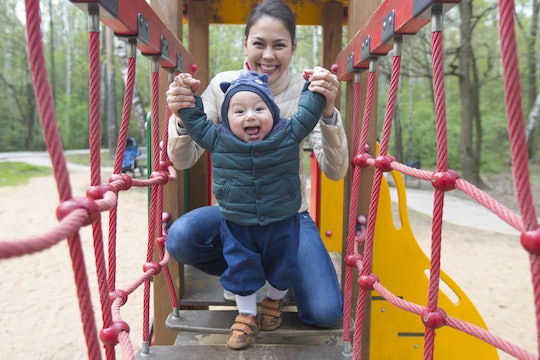 Study: Taking Your Kid To The Park Could Help Them Become Better At Math

Parents know the value of having good parks nearby when you have kids. Public spaces like parks help keep kids busy, give them somewhere to socialize, and somewhere else to go when they're starting to become too much in the house. But, can they help kids get better in school, too? A new study found that spending time outdoors and at parks with your kids may make them better at math later in life.

Parks and other green spaces tend to be associated with promoting physical fitness. Playgrounds, in particular, have been noted for their use in helping kids build motor skills. As outlined by Playground Equipment, children have the ability to develop gross motor skills, which the site defined as large movements involving the entire body, and fine movements.

Think of playground structures like slides and swings. North Shore Pediatric Therapy outlined that slides are a great motor activity, since children need to balance while climbing stairs, and pumping your feet on the swings helps develop sequencing motor skills. Even parks without fancy equipment have their benefits, since children are still given the space to run, jump, and practice their gross motor skills.

These physical benefits alone are great, but how do parks have an impact on children academically?

A study, published in the British Journal of Education Psychology, looked at whether exposure to nature was beneficial for children's spatial working memory, as noted by its abstract. Researchers focused on 4,758 11-year-olds living in urban areas within England, according to Next City.

In the past, spatial memory has been correlated to academic achievement, as seen in a 2005 study on the National Center for Biotechnology Information's website. The study's abstract highlighted that researchers wanted to see whether kids living in greener neighborhoods had better spatial memory.

But, what exactly is working spatial memory?

Working spatial memory, as described by Understood, is a mental sticky note. It helps people keep track of information until they need to use it. Understood outlined that there are two types of working memory: auditory memory and visual-spatial memory.

Combine working memory with spatial memory and, as outlined by Next City, researchers were examining "a component of working memory that allows people to retain and process visuospatial information, and is strongly inter‐related with attentional control."

That's important in math, considering it's a field dominated by patterns and sequences.

Researchers concluded, according to the study's abstract, that "lower quantity of greenspace was related to poorer spatial working memory." Dr. Eirini Flouri, a corresponding author, said, according to a recent press release:

Our findings suggest a positive role of green space in cognitive functioning. Spatial working memory is an important cognitive ability that is strongly related with academic achievement in children, particularly mathematics performance.

More studies need to be done in order to fully explore this link, but this study can help shape urban planning and education. According to Next City, researchers noted in their paper:

Future studies should … use geographical information systems to capture proximity to green space, which may be particularly important for access, especially in children. They should also capture the quality and function of green space and include information about its use. With these changes, future research will be able to determine with greater precision what cognitive benefits immersion in, access to, and use of area green space may confer on children.

Even with the call for further studies, it's clear that providing children with access to parks and green spaces has plenty of benefits — physically and mentally. Studies like this help highlight that free play and nature help kids develop some real, important skills.