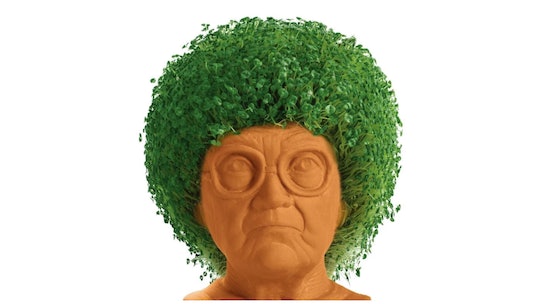 Can't get enough of Blanche, Dorothy, Rose and Sophia? Superfans of that fabulous foursome have a new way to show their love for the ladies from Miami. The Golden Girls Chia Pets are a thing, and anyone who adores the show is going to want one.

I dare you to look at these hilarious Chia Pets without cracking a huge smile. If you've ever seen the show, you know how endearing these ladies are. Having one on your desk with a bushy green head of "hair" would brighten any day. The Chia Pets normally cost $28, but you're in luck — they're currently on sale for $18 at alwaysfit.com. Each kit comes with the planter, a plastic drip tray, and three packets of seeds.

The Sophia Chia has to be my favorite (and not just because it rhymes). It's the most true likeness, in my opinion, and I love that it's got a bit of a cranky face on. That mean mug seems very true to character for then often crotchety, always hilarious Sophia Petrillo (just check out this super funny compilation of some of her best moments put together by TV Land for proof).

The Rose Chia Pet is a close second, because Betty White is obviously a national treasure (and sadly, the only one of The Golden Girls still alive today, according to ABC News, despite being the oldest). You think she got a complimentary stash of these when they came out? If so, I hope she gives them out as holiday presents.

The Dorothy Chia Pet seems to be wearing chunky earrings, which is an amazing detail. The character could often be seen rocking statement earrings, according to Mental Floss, despite the fact that Bea Arthur didn't have pierced ears (and hated the pain inflicted by her clip-ons).

And of course, we can't forget Blanche. If you love Samantha from Sex and the City, then Blanche is definitely your favorite Golden Girl. Seeing this sassy Southern Belle in Chia Pet form every day just might inspire you to be as confident and commanding as Blanche herself.

.The Chia Pet would obviously make a great gift for anyone who loves the show (and I am obligated to point out that the card attached would say, "Thank you for being a friend...."). There are lots of other Golden Girls gifts to choose from, and many of them are even funkier than the Chia Pets. You can pick up a miniature Mt. Rushmore statue featuring the ladies for $16 on Etsy, for example, or stick with something a little more traditional and order a Funko action figure set of the whole squad on Amazon for $37. If you really want to announce to the whole world what your favorite show of all time is, you can even get a Golden Girls dress emblazoned with their faces for $56 from Red Bubble.

The show might have gone off the air a few decades ago, but as the Chia Pets and the rest of these products show, the fandom will never truly let it die. Long live The Golden Girls.