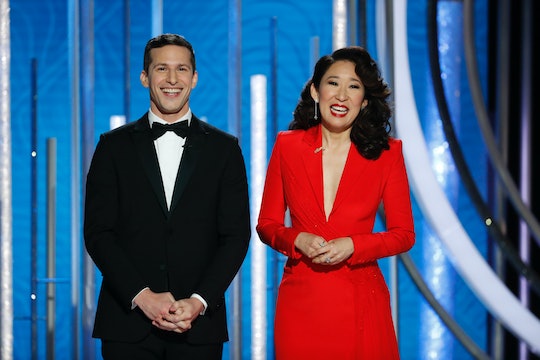 The year may have only just begun, but it's already time to kick off award season in Hollywood. The 2019 Golden Globe Awards celebrated the year's best in TV and film Sunday night, and while it's always fun to see the stars from our favorite shows and movies being honored for their work, the truth is that a poorly chosen host can easily turn the night into a major snooze-fest. Luckily, that wasn't the case for this year's show, because fans were totally here for Golden Globe hosts Sandra Oh and Andy Samberg. And while the hosting duo seemed to already have viewers eagerly anticipating their appearance well before they took the stage, their chemistry and humor easily allowed them live up to expectations.

Oh and Samberg may not have exactly been an expected hosting choice, but according to Variety, the pair actually stood out to producers after they appeared together on-stage at the Emmy awards last September to hand out an award. Not only did they clearly work well together, but Samberg's awards show hosting experience, coupled with Oh's, well, general perfection in all things, pretty much made them the ideal tag-team. And it didn't take long for social media to decide they'd completely nailed it: Twitter seemed to instantly fall in love with the hilarious twosome.

To be fair though, the fact that they perfectly executed their hosting duties didn't seem to come as a huge surprise to their fans. With both Samberg and Oh having individually already earned the adoration of pretty much the entire internet, the news that they'd been tapped to host *definitely* went over well:

As beloved as she and Samberg obviously are, Oh did admit to having some major pre-show jitters. On Thursday, the Killing Eve star told E! News that she was feeling "terrified" with only a few days left to go before the show, and joked, "I have so many stomach problems right now!" And in a sit-down interview with TODAY’s Natalie Morales, she explained that, while she felt super comfortable with the idea of hosting with Samberg, she was feeling the pressure of taking on such a big responsibility, especially given how significant an achievement it is for her as a Korean woman in Hollywood.

That was also something Oh made sure to address on-stage as well. Towards the end of the opening monologue, the actress took a moment to a acknowledge what a big deal it was for her to be hosting:

I said yes to the fear of being on this stage tonight to look out onto this audience and witness this moment of change. And I'm not fooling myself. I'm not fooling myself, next year could be different, but right now this moment is real. Trust me, it's real. Because I see you and I see you, all these faces of changes. And now, so will everyone else.

And it really *is* a big deal for representation: Oh has actually made history as the first-ever person of Asian descent to host the Golden Globe Awards. And while it's hard to fathom that it's literally taken 76 years for that to happen, it's not the only barrier-breaking accomplishment Oh has to her name. In July 2018, her role in Killing Eve earned her a lead actress Emmy nomination, making her the first Asian woman to ever be nominated in the category.

But as much as Oh's hosting duties may have been significant for representation, she and Samberg ultimately opted to shy away from making any heavy political statement or social commentary during the ceremony, choosing instead to just keep the night funny, light, and celebratory. To some, this was not the best strategy:

But given the fact that the past year has felt pretty heavy, the positive approach seemed to go over well with most, who appreciated the duo's comedic chops:

Hosting the Golden Globe Awards is certainly a big job, but it's clear that Oh and Samberg rose to the occasion. And given how challenging it can be to find solid award show hosts, it seems they may have also made a pretty solid case for returning to the stage in 2020