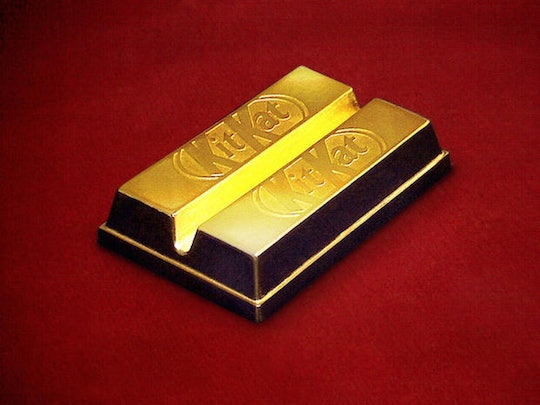 "Golden" Kit Kat Bars Are Here To Make All Your Childhood Dreams Come True (Well, If You Live In Japan)

Admit it: When you were little, you probably fantasized at least once about Willy Wonka’s Chocolate Factory being a real thing — and that you yourself would one day get a Golden Ticket of your own. While you probably won’t be hearing from Willy Wonka anytime soon (sorry to be a buzzkill), I do have some candy-related news this morning that might soften the blow: Nestle is releasing a Golden Kit Kat Bar at the end of December. That's right — they're going one step further than just including a silly Golden Ticket in their packaging. Nestle's straight-up wrapping its Kit Kat bars in an edible gold-leaf coating. Pretty cool, huh?

There's just one catch, though: According to Time, the limited edition candy bars will only hit shelves in Japan — at least for now, anyway. It will also get a super official (and super cool) name: the Sublime Gold Kit Kat. As for why these "golden" bars are even being produced, Time reports that it's all in celebration of the one million people who have visited eight "Chocolatory" stores throughout Japan so far.

So how exactly will the magical treats be created? Nestle promises to keep things mostly true to the way Kit Kats are currently made (since we all know and love them as they are). But the Sublime Gold version will have a few small tweaks: The base will be comprised of a rich bitter-chocolate version of the bar, and the outer layer will be dressed in gold leaf — which will be put on by hand.

While you probably can’t wait to get your hands on this piece of chocolaty goodness, there are a few setbacks (besides the fact that you may not be traveling to Japan any time soon). For one, these bars will cost you a whopping $16 a piece (or 2,016 yen). And like the coveted Golden Ticket bars, these babies are super exclusive — only 500 will be produced in total, Rocket News 24 reports. Still, just like Charlie, a few lucky recipients who signed up for a Chocolatory membership will be bestowed with this one-of-a-kind. chocolaty goodness.

Though this may seem like a bold move by Nestle, the company has definitely experimented with their popular Kit Kats before. Some of the flavors may have left a lot of people scratching our heads, but others are super mouth-watering. And just like their new golden treat, most of these are available in Japan — so add that to the growing list of reasons why you need to put Japan on your travel list.

At least you'd feel healthy while chowing down on one (or two, or three) of these.

Yikes! Not sure how I feel about these ones... You'd definitely need a massive glass of water nearby, just in case.

Still, apple vinegar and hot chili aside, I am seriously craving a Kit Kat bar right about now... BRB.

More Like This
A New 'Golden Girls' Themed Restaurant Is Happening!
10 Dreamy Summer Popsicles To Indulge In Stat
9 Labor Day Weekend Getaways In New England That Are Perfect For Families
Gathre’s Winnie The Pooh Collection Is Finally Here