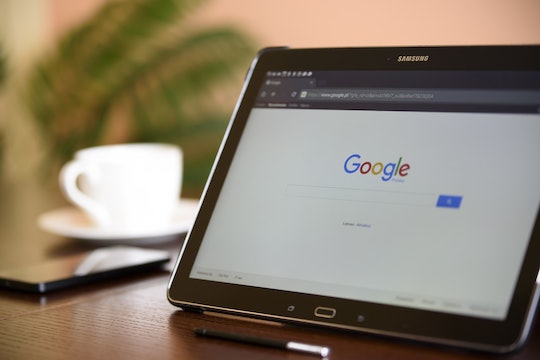 For many, when something in their life isn't going quite right, the Google search bar is the first resource they turn to — especially if the topic at hand isn't something they're ready to discuss with others yet, like their mental health. Gathering more information is a great starting point for those who are depressed, but considering that only half of all people with depression will eventually get treatment for it, information alone is clearly not enough. Now, Google wants to change that: starting on Wednesday, if you Google "depression," you'll get a questionnaire at the top of your search results that can help you figure out if you have symptoms of clinical depression.

The new tool, announced on Wednesday by Google, is the result of a partnership between Google and the National Alliance on Mental Illness. From now on, when Google users in the United States search for "depression" or "clinical depression," the Knowledge Card that appears at the top of their search results will give them a new option that reads, "Check if you're clinically depressed."

If users click the tool, they'll be taken to a clinically validated questionnaire — the PHQ-9 — which will let them determine whether they have symptoms of clinical depression. It's not a replacement for an actual physician, of course, but it can help people determine their level of depression and whether they should speak to a professional.

On top of that, Google's tool also assures users that their answers are kept confidential, which should encourage even those wary of stigma to learn more about their possible depression. Google's Knowledge Card also removes some of the stigma around mental health by letting users know that depression is "very common" among the American population — and encourages treatment by letting people know it's treatable.

According to HuffPost, one study in the United Kingdom found that a new Google search for "depression" is carried out every two seconds, while another study found that the number of searches for "depression" have increased by half in the last five years alone.

"Statistics show that those who have symptoms of depression experience an average of a 6-8 year delay in getting treatment after the onset of symptoms," the National Alliance for Mental Health wrote in a guest post for Google. "We hope that by making this information available on Google, more people will become aware of depression and seek treatment to recover and improve their quality of life."

Six years is far too long for anyone to have to endure the struggles that come with depression without help, and hopefully, Google's new tool will help more people recognize a problem and seek help when they need it.