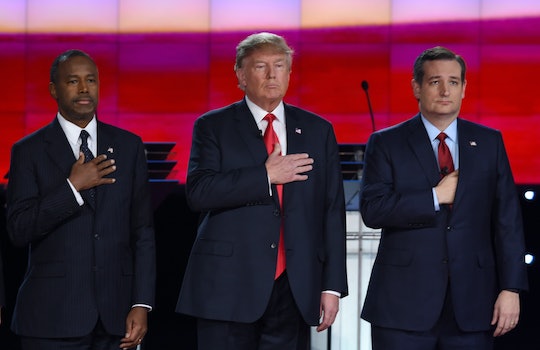 President Obama's final State of the Union address on Tuesday night was set to focus on pushing the country forward and bringing the American people together, but from the various GOP candidates' responses to the SOTU, Republicans don't seem to be on the same page. Before Tuesday's address, the White House released a handful of excerpts from the president's speech, and overall, the message was clear: In his final year in office, Obama will be all about bringing the country into the 21st century, whether everyone likes it or not. Obviously, not everyone is happy.

In his speech, Obama specified that he planned on returning to his original message from way back in 2008. Remember "yes, we can?" Obama's all about that. He explained,

We live in a time of extraordinary change...America has been through big changes before — wars and depression, the influx of immigrants, workers fighting for a fair deal, and movements to expand civil rights. Each time, there have been those who told us to fear the future; who claimed we could slam the brakes on change, promising to restore past glory if we just got some group or idea that was threatening America under control. And each time, we overcame those fears

That's great and all, but has the president not watched any of the GOP presidential debates? Working together is a nice idea, but if even he has trouble achieving as much, how does he expect Republicans to do the same? It's a madhouse. It's a logical plan on paper, politicians working together, but it doesn't look like consensus is something anyone is thinking about as the 2016 election approaches. In fact, some GOP candidates and prominent conservative voices are skipping the address altogether — not exactly the best start:

If anything, most of the Republican candidates on Tuesday were ready to prove that President's Obama take on how the country is faring is wrong, wrong, wrong.

Jeb Bush is focused on fighting President Obama on every front. And especially his foreign policy, despite the President's strong stance on how the rest of the world "calls us" when they need help overseas.

Paul retweeted a headline from Mediaite about him wanting President Obama to resign tonight. Which is completely unrealistic, impossible, and makes it seem like the candidate watches too much Scandal.

Then he complained the President was taking too long:

If you can't sit through an hour long speech...

Rather than focusing on the text of the president's speech, Carson opted instead to use the moment to criticize his perceived failures. "While POTUS is preparing to talk about his so called "accomplishments", 10 of our American sailors are being held by #Iran," Carson tweeted on Tuesday.

Of course, Trump is busy tallying his numbers. Why would he be doing anything different? Is he even tuning into the SOTU speech?

Cruz may not have attended the speech, but he did talk to Lester Holt afterwards about it, saying that it wasn't a state of the union speech, but a "state of denial." Cruz said that Obama and Hillary Clinton "put their heads in the sand like ostriches rather than acknowledging the threat of Jihadists who want to murder us."

It seems like Obama's wish for cooperation isn't going to be granted.