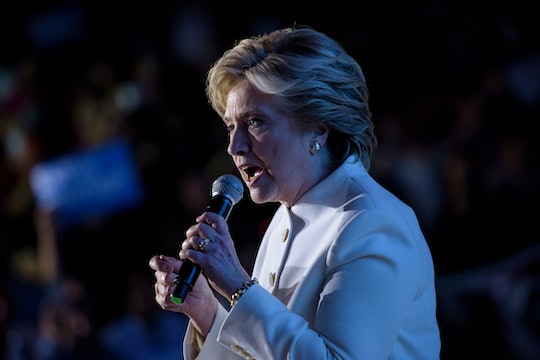 GOP Congressman Says Ladies Need To Be Told When They're Being Nasty, Setting Girls Back

Near the end of Wednesday night's final presidential debate (thank God), Republican candidate Donald Trump jumped in on Democratic nominee Hillary Clinton's statement on social security, muttering, "Such a nasty woman." The phrase instantly spawned all kinds of internet feedback: fake ads for Nasty Woman perfume emerged and GIFs of Janet Jackson's "Nasty" overlaid with Clinton's face on it made the Twitter rounds. It was clearly not Trump's best interjection — but GOP congressman Brian Babin decided on Thursday that he should further clarify Trump's statement, saying ladies need to be told when they're being nasty. As if Trump's comment alone wasn't enough, Babin's additional explanation points out exactly where society is going wrong when speaking to its young women.

While hashing out the final presidential debate on FOX's Alan Colmes Show on Thursday night, Babin was asked whether Trump's "nasty woman" comment was appropriate. At first, he didn't answer directly, instead choosing to say: "You know what, she's saying some nasty things."

Well I’m a genteel Southern gentleman, Alan. I think sometimes a lady needs to be told when she's being nasty.

Personally, I'm not sure how that's genteel or gentlemanly. And let's not forget that the man who called Clinton a nasty woman for making a quip about his tax paying practices (or lack of them) is a man who insults and degrades people on a nearly daily basis, using language that's much more offensive than simply a witty aside.

The problem is, women have been conditioned for a long time to align with their gender stereotype — which is to be nice, complacent, and submissive. We begin training early: one study found that unidentified babies seen smiling and cooing were assumed to be girls, while fretful babies were more likely to be labeled as boys. People also take longer to recognize angry women's faces as females and beaming men's faces as males, rather than vice versa, according to Slate.

And those internalized expectations are hurting women and holding them back. According to the Harvard Business Review, being taught from early childhood that they should focus on others' needs, rather than advocating for their own, is one of the reasons only 7 percent of women attempt to negotiate for a better starting salary — while 57 percent of men do the same.

The onus is not only on young women for internalizing that stereotype, either. It's also on society, since when women break from that compassionate, compliant stereotype, they're often punished by others. A 2013 study found that female opposition leaders are judged significantly more harshly by voters for being tough than their male counterparts are. Male employers will more frequently penalize female employees who negotiate for higher salaries than male employees who do the same. In one study, people said they would be less inclined to work with women who have attempted to negotiate for a higher salary. In another, researchers found that hiring managers focus more on women's social skills during the hiring process, whereas men were judged more on their job competence.

So no, Babin, "ladies" don't need to be told when they're being "nasty" — and in fact, we should be encouraging young girls to be assertive, to stand up for themselves and their views, and to demand their worth. Because until being a woman with agency is seen as commonplace and powerful, rather than as "nasty," women will continue to be punished for acting in the same way their male counterparts do.