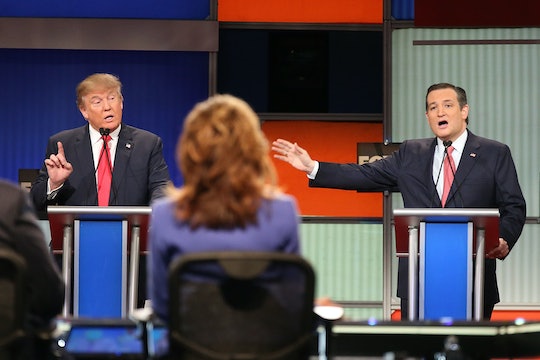 If Thursday night's GOP debate were to be described in a single word, it would be "...Huh?" Despite the fact that the primary showdown was slated to be a one of the last before the crucial Iowa caucuses — which are scheduled to be held Feb. 1 — the atmosphere inside the North Charleston, South Carolina auditorium felt anything but presidential. If nothing else, the slew of GOP debate memes and jokes peppering Twitter on Thursday night ended up providing viewers with a better feel for the Fox Business meet-up than the candidates themselves.

"BREAKING," joked one Twitter user, remarking on the lack of serious policy conversation, "fourteen debate fact checkers rushed to the hospital for dangerous head explosions." (It may have been a joke, but it wasn't too far off.)

In truth, there were plenty of confusing moments during the Republican melee. Between Marco Rubio's remark about funding the military "rather than Planned Parenthood", Ted Cruz and Donald Trump's epic birther fistfight, and Ben Carson's strange (sometimes sleepy) interjections, there was simply no shortage of awkward moments at Thursday's sixth GOP debate (seriously, I had secondhand embarrassment more times that I count). Luckily, for everyone's sake, Twitter was characteristically on point, doling out hilarious photos and witty one-liners faster than you could say "John Kasich":

Thank you for the memories, Twitter. You've been the support system we all needed tonight, but not the one we deserved.