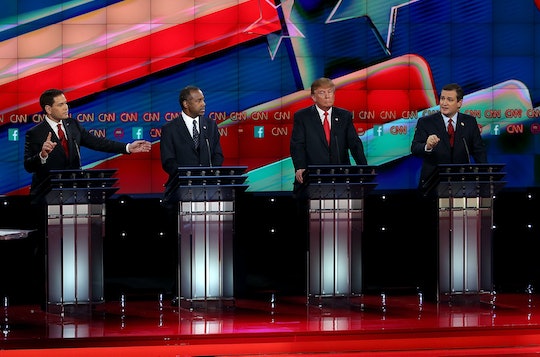 Given the recent attacks on Paris and San Bernardino, as well as the bomb threats made to New York and Los Angeles public schools just this morning, the hot-button issue in tonight's fifth GOP debate was how to deal with the threat of Islamic extremism. The results led to a series of GOP Debate quotes about ISIS and terrorism that only clarified where the candidates stand on the issues.

Though this was the last debate of 2015, the stage was still packed with nine candidates looking to prove themselves. While the fourth debate delved into domestic topics like minimum wage and bank bailouts, this one focused on foreign policy. For establishment outsiders like Donald Trump and Ben Carson, foreign policy has not been a strength. In the last GOP Debate, Carson summarized his plan for defeating radical jihadists as, "We have to say, how do we make them look like losers." Although Trump's plan to ban Muslims from entering the United States has been widely publicized, his larger foreign policy stances are much harder to nail down. Ted Cruz and Marco Rubio make a much better showing in this arena, as does Jeb Bush despite his continued lackluster performances. What sets Trump apart is his ability to polarize and rile a crowd, a tactic he took full advantage of tonight.

"We are not talking about isolation, we are talking about security. We are not talking about religion, we are talking about security. Our country is out of control. People are pouring across the southern border. I will build a wall, it will be a great wall. People will not come in unless they come in legally. Drugs will not pour through that wall. As far as other people, like, in the migration, where they're going tens of thousands of people having cell phones with ISIS flags on them, I don't think so, Wolf. They're not coming to this country. And if I'm president, and if Obama has brought some to this country, they are leaving. They're going. They're gone."

Actually, when you're talking about banning people from an entire religious group on the basis of their religion alone... I think that qualifies as talking about religion.

"These people are terrible in ISIS. Not masterminds."

Well, to be fair, if anyone is an expert in being terrible and not a mastermind...

I've never heard the fight against a horrifying terrorist group sound so much like "Get off my lawn!"

"I would be very, very firm with families [of terrorists], and frankly, that will make people think. Because they may not care very much about their lives, but they do care, believe it or not, about their families' lives."

"The president... has left us unsafe. He spoke to the American people to reassure us, I wish he hadn't spoken at all. He made things worse. Because what he said was 'We're going to keep doing what we're doing' and what we're doing isn't working at all."

Actually ISIS has been losing territory due to U.S. efforts, so...

Well, that would be a lovely sentiment if I weren't convinced Cruz is pretty cool with the idea of a Christian theocracy here in the God ol' USA.

"Technology has moved on and the terrorists have moved on with it."

This sounds like something your mom would say right after she talks about how her kids help her get on The Facebook whenever they're home from college.

"One of the things I would immediately do, in addition to defeating them here at home, is to bring back the warrior class: Petraeus, McChrystal, Maddis, Kean, Flynn."

She's getting the band back together, you guys! You know, the band that played us into the previous couple wars... that we're still fighting...

"If you want something done, ask a woman."

... Is it okay if I don't ask this particular woman?

"We need to go and destroy ISIS ... And when I see they have a climate conference over in Paris they should have talked about destroying ISIS, because they are involved in virtually every country."

He seems to miss the point of having conferences to address particular issues. Like, you have to wonder if he's the kind of guy who goes to a Christmas party dressed as a leprechaun because St. Patrick's Day is a great holiday, too.

"I don't want to be policemen of the world, but we can't back off of that."

"We need to make sure that anyplace ... [with] a lot of people engaging in radicalizing activities, we need to be suspicious of it. We need to get rid of all this P.C. stuff. People are worried "somebody's going to say I'm an Islamophobe' that's craziness. Because we are at war ... They will take advantage of our P.C. attitude."

Any place with a lot of people engaging in radicalizing activities? In that case, I'm thinking there's a venue in Las Vegas tonight that might bear some surveillance...

He doesn't want to criminalize Islam or execute the families of terrorists. This pretty much made him the most reasonable person on stage.

More Like This
The 20 Most Romantic Quotes From Friends
Sweet Valentine's Day Quotes
Freeze! The Single From The New 'Bluey' Album Just Dropped
Does The FDA's Plan To Limit Lead In Baby Food Go Far Enough?
What Parents Are Talking About — Delivered Straight To Your Inbox