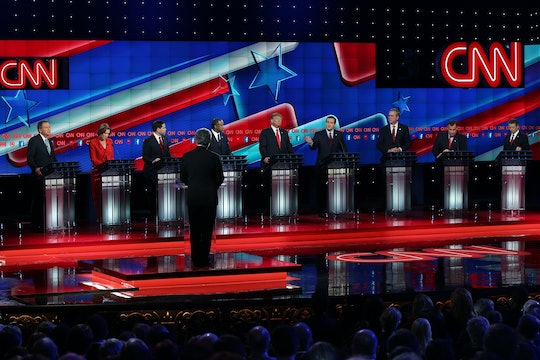 These issues are not new to the Republican party. Earlier this year, Trump drew major criticism for his comments on Muslims and refugees. In November, CNN reported that Trump was doubling down on his desire to end Syrian immigration to the United States. In December, he took an even more controversial position: Trump called for the country to block Muslim immigration. He claimed that a sizable portion of the Muslim community hates America and characterized that hatred as a threat.

Trump faced backlash from politicians and analysts across the country, including his fellow nominees who have condemned Trump's approach to immigration. And the reactions tonight were no different.

Donald Trump started off the debate by speaking about radical Muslim terrorism, claiming, "People like what I say, people respect what I say" and crediting himself for starting a discussion that needed to happen, in the wake of terrorist attacks in Paris and San Bernardino, California. Ben Carson began the debate with a moment of silence for the victims of the San Bernardino shooting, and

Donald Trump claimed he isn't, "talking about religion, he is talking about security" when alluding to his controversial comments concerning his plan to "Ban all Muslims" from coming into America. Trump went on to claim he would, once again, that he would "build a wall, and it will be a great wall" and it would keep the United States of America safe by keeping out, well, just about everyone else.

Bush eventually chimed in, saying, "We can't disassociate ourselves from peace-loving Muslims", clearly disassociating himself and his campaign from Trump's would-be policies. He went on to call Trump, "great at one liners, but a chaos candidate and he would be a chaos president."

Ted Cruz said that he "understood" Donald Trump's sentiments, even though his comments have been highly criticized. "I understand why Donald has suggested what he has," Cruz reiterated, alluding to the recent terrorist attacks in Paris and California as reasonable catalysts for Trump's anti-Muslim remarks.

Marco Rubio mirrored Ted Cruz's "open-mindedness", saying that, while trying to keep all Muslims out of the United States of America "isn't going to happen", he understood why Trump and his supporters would feel that way because, "this president hasn't kept us safe".

It's clear that the GOP Presidential hopefuls weren't afraid to voice their anti-Muslim sentiments, even if some of them were a tad more tactful than front-runner Donald Trump.