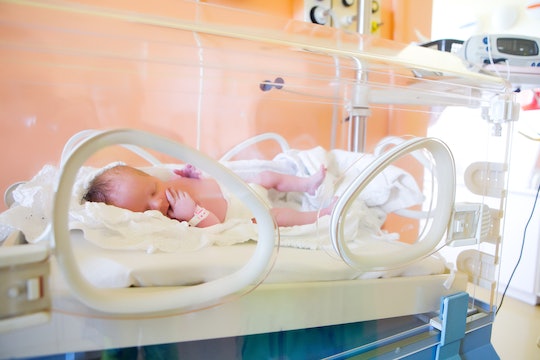 Parents of premature babies have so much stress to deal with, right down to trying to find clothes that fit their tiny newborns properly. One company is trying to solve that particular problem, while giving back in the process. Goumikid's Dream Big campaign is all about helping the littlest fighters — and it's so easy for you to help out, too.

Goumikids is partnering up with the March of Dimes for the campaign, and it's super simple. The company is inviting people to share their "big dreams" (whether it's something for your child, yourself, or the world in general) on Instagram or Facebook with the hashtag #GoumiDreamBig. For every person who does so in the month of August, the company will donate a pair of preemie mittens to a NICU baby in need. Like I said, super simple and seriously could not be easier.

Goumikids' founder Lili Yeo started making preemie clothing after having a preemie herself. She had trouble finding mittens and booties that would actually fit babies who only weigh a few pounds — her daughter was born at just five pounds. She wanted to fill the gap she saw in that market, but it was about more than just fashion. The company's website explains that the mittens are also intended to help with "unplanned extubations" in NICUs, which is when a baby pulls out the tube that helps them breathe when they're having trouble doing so on their own. Daily Nurse explained that unplanned extubations are one of the most harmful yet common dangers that NICU babies face. As the mom of a baby boy who was hooked up to breathing tubes five different times, I can definitely see how keeping preemie fingers safely encased in mittens could help prevent the tube being accidentally pulled out.

While that's one of the more dramatic uses of Goumikids preemie mittens, they can also come in handy in daily life. Babies often end up accidentally scratching themselves with their surprisingly sharp little finger nails, and mittens can help stop that from happening. Not everyone feels mittens are worth it, but any parent who has ever struggled to trim up those itty bitty talons knows that sometimes throwing on a pair can save you lots of stress.

Goumikids says its preemie mittens are made from a bamboo and organic cotton blend, so they're super soft. The company notes that they're also "naturally antimicrobial and environmentally sustainable," since they aim to manufacture them with the smallest carbon footprint possible. They're actually available in a micro-preemie size option as well.

The company has already donated thousands of pairs of mittens, but the Dream Big campaign will take the giving even further. If you're interested in supporting the campaign, all you have to do is use the hashtag before the end of the month. And if you're in the market for preemie gear, or are dressing a former preemie who's all grown up now, Goumikids has plenty of other adorable kids clothes to peruse at Goumikids.com.

More Like This
The Best Toys For 3-Month-Olds
Baby Growth Spurts: When They Happen & What To Expect
41 Strong & Sweet Baby Boy Names That Start With “K”
14 Free, Printable Birth Plan Templates For Every Kind Of Delivery