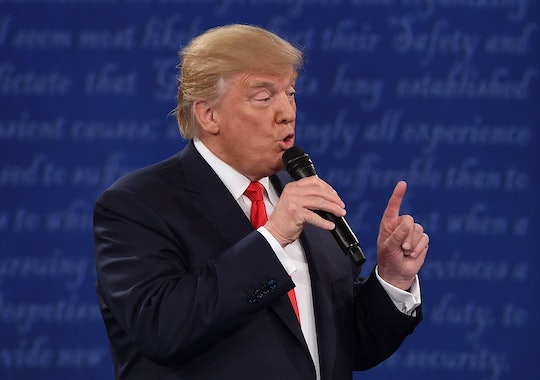 Grabbing Someone's Genitals Is Sexual Assault, Despite What Some People Think

On Sunday night, viewers across the United States tuned in to the second presidential debate — and it was a fiery and intense debate, to say the least. There were undoubtedly a lot of moments and exchanges to unpack between Republican Party presidential nominee Donald Trump and Democratic Party nominee Hillary Clinton. One subject area that made its way to the debate stage conversation was sexual assault. Last week, The Washington Post released an audio recording of a 2005 conversation between Trump and Billy Bush, then a host of Access Hollywood. The recording revealed Trump saying he just "starts kissing" women he deems beautiful, and "doesn't even wait." He boastfully added that since he's "a star" women allow him to do anything – even "grab them by the p---y." But there should be no confusion: Without consent, grabbing someone's genitals is sexual assault — despite RNC communications director Sean Spicer's uncertainty.

As Mother Jones reported on Monday, Spicer, in an interview with The Weekly Standard, said of Trump's 2005 recorded conversation that he wasn't sure whether Trump's description of his alleged actions constituted sexual assault. "I don't know," he reportedly said when pressed about the "p---y grab[bing]" remarks. "I'm not a lawyer."

But it doesn't take a lawyer to understand Trump's remarks described sexual assault.

For context: The debate kicked off with CNN's Anderson Cooper, who co-moderated the town hall debate, addressing Trump's 2005 recorded conversation. Cooper criticized Trump's defense of his aggressive comments towards women, which Trump described as "locker room banter." (It's worth mentioning that professional athletes have since called out Trump's excuse, and rightfully so, saying that his remarks are NOT consistent with locker room talk, nor should that rhetoric ever be accepted.)

"You described kissing women without their consent, grabbing their genitals," Cooper said. "That is sexual assault. You bragged that you have sexually assaulted women. Do you understand that?”

Trump, unsurprisingly, responded by insisting that it was just "locker room talk" and that he never "said" that it was sexual assault. But it's not up to Trump to say that the actions he spoke of, whether were true or not, described sexual assault. It's simply the definition of sexual assault, full stop. As the United States Justice Department defines it:

Sexual assault is any type of sexual contact or behavior that occurs without the explicit consent of the recipient. Falling under the definition of sexual assault are sexual activities as forced sexual intercourse, forcible sodomy, child molestation, incest, fondling, and attempted rape.

Trump's recorded conversation is what rape culture is all about – bragging about and normalizing sexual assault – a sexual act without an affirmative "yes." Both his past remarks and his or anyone's excuse that it's just locker room talk, should be called out as such.

Spicer and Alabama Sen. Jeff Sessions, have joined the list of Trump supporters who refuse to label Trump's actions for what they are. For his part, Sessions apparently had a more confident response than Spicer this week, saying that calling Trump's remarks sexual assault is "a stretch."

"I don't characterize that as sexual assault," he said according to The Weekly Standard. "I think that's a stretch. I don't know what he meant... "

Sexual assault and rape culture continue to be important topics that need to be addressed head-on and on all fronts – people's lives depend on it. Thankfully, it was certainly a significant topic of discussion during Sunday night's debate, as it should have been — and as both Sessions and Spicer's outlandish responses have proven.